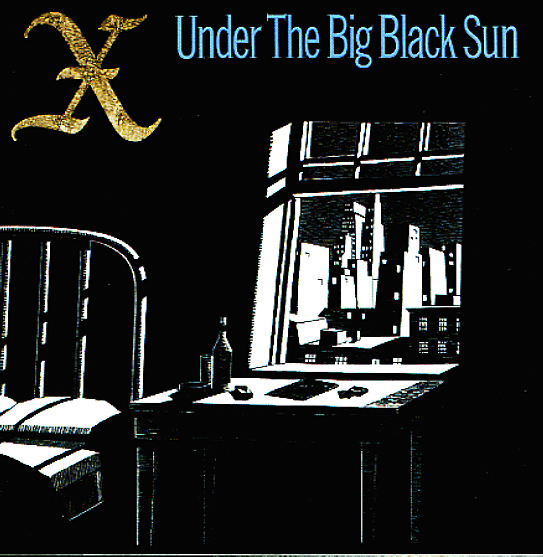 A key part of the initial tremendous legacy of X – one of the greatest run of records that any group could ever hope for! This third set has the group honing and refining their sound even more – losing none of their roots in the LA hardcore scene, but also inflecting their sound with a complexity that none of their previous scenemates could match – a sense of musicianship that was never too polished, but always razor sharp – at a level that brought even more righteous power to their lyrics and completely unique songplay. The quartet are one of the greatest ever in rock and roll – and this album's a classic that transcends time and style – essential listening on a shortlist of the best guitar-based sounds of the late 20th century. Titles include "The Hungry Wolf", "Riding With Mary", "Under The Big Black Sun", "Blue Spark", "Because I Do", and "Motel Room In My Bed".  © 1996-2023, Dusty Groove, Inc.
(Red label small E pressing.. Includes the printed inner sleeve. Cover has light wear.)

Weird Scenes Inside The Gold Mine
Elektra, 1972. Very Good 2LP Gatefold
LP...$13.99
A seminal collection of some of the group's best! LP, Vinyl record album

Shake It Up
Elektra, 1981. Very Good+
LP...$11.99
A well-remembered classic from The Cars – one of those records that had the group finding a perfect way to tap into new wave energy from the underground, yet somehow manage to score some major hits at a time when American radio was still pretty shy of so many new sounds! This set still has ... LP, Vinyl record album

2x4
Elektra, 1987. Very Good+
LP...$9.99
One of the great underappreciated and hugely prescient jangly guitar rock bands of the 80s – and this might be their best album! Guadalcanal Diary hail from Marietta, GA and often get lumped in with the fertile Athens, GA scene at the time, and they definitely share a some common traits with ... LP, Vinyl record album