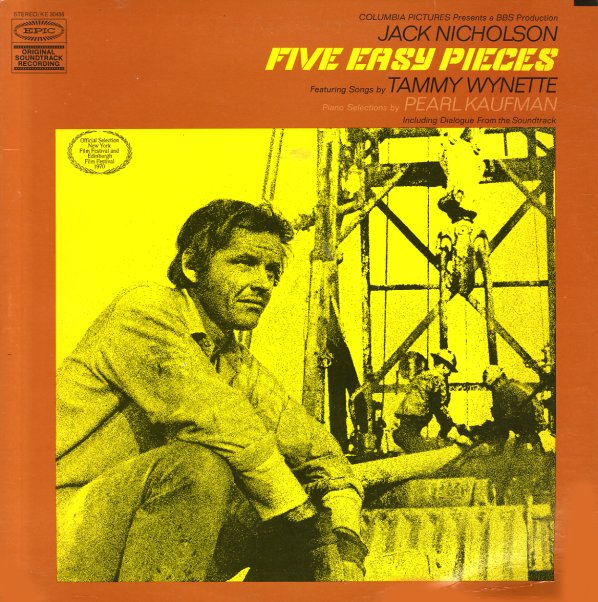 A schizophrenic soundtrack to this groundbreaking film of the early 70s – one that features a number of Tammy Wynette hits, alongside some classical piano pieces, alongside some great dialogue snippets from the film! Tammy's tunes include the hits "Stand By Your Man" and "DIVORCE", and the classical pieces are performed by Pearl Kaufman during the scenes when Nicholson plays the piano in the film. The best bits, though, are the dialogue passages – which include Jack's famous "chicken" order in "On The Road", plus "Oil Field", "Motel", and "Bobby's Monologue With His Father".  © 1996-2022, Dusty Groove, Inc.
(Cover has light wear, some aging, minor seam splits, and initials in marker.)

Spy Who Came In From The Cold
RCA, 1966. Very Good+
LP...$3.99
A spy film – and with a mix of jazz and orchestral themes that's similar to some of Henry Mancini's work from the same time. The main theme is nice and jazzy, with some good guitar, and a great crime theme sound. Two other nice tracks are "The Pussy Willow Club" and "Pussy ... LP, Vinyl record album

Eyes Of Laura Mars
Columbia, 1978. Very Good Gatefold
LP...$4.99
A mixed bag of a soundtrack – with some tracks that are exclusive to the film, and others that are disco tracks used in the movie! The main score was handled by Artie Kane – who did lots of key work earlier with Mancini – and it's got a dark, creepy, almost atonal 70s horror feel ... LP, Vinyl record album

Pot-Boilers – Soundtracks To Stephen Dwoskin Films 1966 to 1970
Trunk (UK), Late 60s. Near Mint-
LP...$14.99
The great Ron Geesin is a man of many talents – UK studio genius, ace composer, arranger, and more – with ties to worlds that include film music, sound library work, easy listening, and even collaborations with Pink Floyd! The music here is all from films by underground director ... LP, Vinyl record album