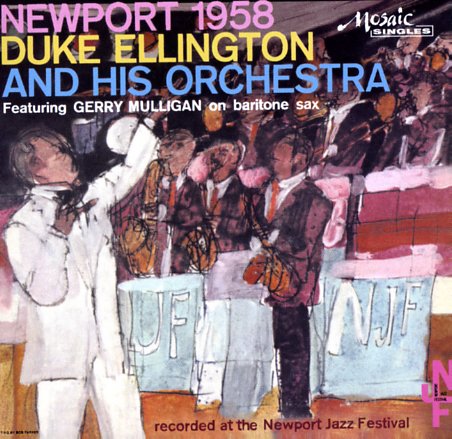 Duke Ellington at Newport and in the studio – in a set of tracks recorded both live and away from the concert – but with a really unified feel overall! Duke's group here is in fine fine form – with key late 50s players who include Johnny Hodges on alto, Paul Gonsalves on tenor, Jimmy Hamilton on clarinet, and Cootie Williams, Clark Terry, and Cat Anderson on trumpets – plus a guest appearance by Gerry Mulligan on baritone sax! A few tunes stretch out nicely with that mix of complicated modernism and all-out swing that Duke was bringing to the table at the time – and although initially aimed at the popular festival crowd of the time, the album's got more than enough depth to please fans of his other 50s classics on Columbia. Titles include "Juniflip", "El Gato", "Just Scratchin The Surface", "Princes Blue", "Multicolored Blue", "Happy Reunion", and "Jazz Festival Jazz".  © 1996-2022, Dusty Groove, Inc.
(Mono 6 eye pressing with deep groove. Cover has some wear and aging, bent corner at the top left, and a small split in the bottom seam.)

Such Sweet Thunder
Columbia, 1957. Near Mint-
LP...$11.99 (CD...$6.99, CD...$6.99)
Excellent Duke Ellington work from the late 50s – written and recorded during a period in which he was reemerging with a stronger jazz vision than ever before! The set was written by Ellington and Strayhorn – and dedicated to the Shakespeare Festival in Stratford, Ontario – but ... LP, Vinyl record album

Drum Is A Woman
Columbia, 1956. Very Good+
LP...$19.99
A hokey cover and title, but a hip little record from Duke Ellington – kind of a story of percussion and jazz, all wrapped together with some great vocals and narration! The format is kind of far-reaching, but never too stuffy – and in a way, the album offers a great opportunity to ... LP, Vinyl record album

Ellington At Newport
Columbia, 1956. Very Good-
LP...$19.99 24.99
One of the first albums to ever issue recordings made at the Newport Jazz Festival – quite a big hit, and the beginning of a real trend in jazz! The set's also some great work by Duke – free to perform in a setting that's not bound by some of the time restrictions of earlier years, ... LP, Vinyl record album