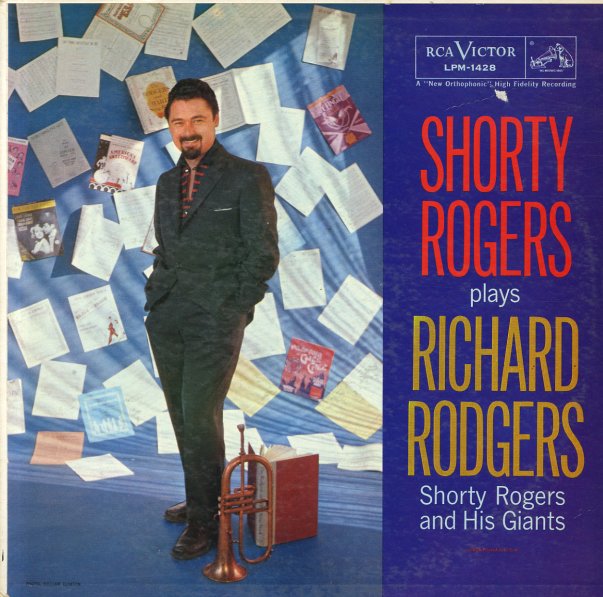 An RCA classic from Shorty – one that features an expanded version of his Giants group, running through some of the best compositions of Richard Rogers! The gimmick of the twin Rogers in the title notwithstanding, the album's a pretty tight little set – as Shorty's leading an all-star group that includes Pete & Conte Candoli, Frank Rosolino, Jack Montrose, Bill Holman, Pete Jolly, and Pepper Adams – all of whom are great company in this session of tight arrangements. Shorty still gives the best players enough solo space to keep things interesting – and the real charm of the record is the way that familiar tunes are transformed by the swinging arrangements and surprisingly nice solo moments. Titles include "I've Got Five Dollars", "A Ship Without A Sail", "Mimi", "Ten Cents A Dance", "The Girl Friend", "On A Desert Island With Thee", and "I Could Write A Book".  © 1996-2022, Dusty Groove, Inc.
(Mono pressing with deep groove. Vinyl is in great shape, but cover has some wear and aging, with reinforced tape holding the top and bottom seams.)

Portrait Of Shorty
RCA, 1958. Very Good+
LP...$2.99 (CD...$1.99)
Tight big band work from Shorty Rogers – cut a few years after his early LA sides for RCA, but in a very similar mode. The tracks are slightly longer than usual, and it's stunning how many players get to solo on each track Most only get a few bars, but they make more than enough with the ... LP, Vinyl record album