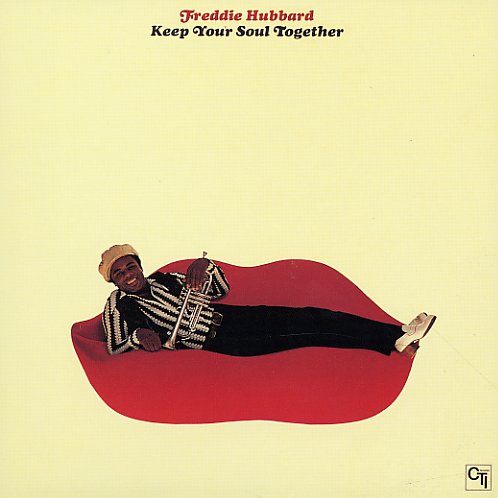 Freddie Hubbard at the peak of his 70s powers – and one of his finest albums of the decade! The record follows strongly in the tone that Freddie set at CTI on his mighty Red Clay and Sky Dive sets – long, drawn out tracks – done with lots of electricity in the rhythms, and a very cosmic approach to the solos! The groove is funky, yet easygoing – open and never too uptight – and served up with great help from Hubert Laws on reeds, George Benson on guitar, and Ron Carter on bass! Titles include "Keep Your Soul Together", "Spirits Of Trane", "Destiny's Children", and "Brigitte".  © 1996-2023, Dusty Groove, Inc.

Super Blue
Columbia, 1978. Very Good
LP...$1.99 (CD...$14.99)
A sweet late 70s set from Freddie Hubbard – a slight move away from some of his highly-electric sides of the CTI years, yet one that still has some of the most soulful qualities of that work! Freddie's trumpet has a nicely spacious quality throughout – one that's flowing, and almost ... LP, Vinyl record album

Olinga
CTI, 1974. Very Good+ Gatefold
LP...$19.99
Milt Jackson's third album for CTI – part of a wonderful run that really helped him redefine his sound in the 70s! The album's got the electric approach you'd expect from the label – a great change from the sound of Jackson in the Modern Jazz Quartet, and a surprisingly great setting ... LP, Vinyl record album

Canned Funk
CTI, 1975. Very Good Gatefold
LP...$19.99
Nothing canned here – as the sound, style, and groove of the record is as fresh and freaky as the classic image on the cover! The riffing rhythms get going right from the start – some amazing lines from a rhythm combo that includes Joe Beck on guitar, Herb Bushler on bass, Jim Madison ... LP, Vinyl record album

Black Widow
CTI, 1976. Near Mint-
LP...$11.99
Funky 70s work from film score maestro Lalo Schifrin – served up with a bit of a disco twist, and plenty of the electric jazz funk elements that were showing up in his soundtracks at the time! Lalo's on keyboards, playing a cool host of electric ones that give the record a nice spacey sound ... LP, Vinyl record album

Concierto
CTI, 1975. Very Good+ Gatefold
LP...$29.99
One of Jim Hall's most compelling albums from the 70s – a mix of lightly swinging tunes and more complicated numbers, recorded with some of his best partners from earlier years! Chet Baker is on trumpet, Paul Desmond is on alto sax – and the rest of the group includes Ron Carter bass, ... LP, Vinyl record album

Carnegie Hall
CTI, 1973. Near Mint- Gatefold
LP...$28.99
Maybe some of the coolest music ever recorded at Carnegie Hall – a wonderful venue that's perfect for the blend of soul and space of the CTI Records years of Hubert Laws! Laws' lead lines on flute really stretch out beautifully in the setting – given ample room to roam amidst a lineup ... LP, Vinyl record album

Bad Benson
CTI, 1974. Very Good+ Gatefold
LP...$14.99
Pretty mellow stuff from George Benson, but with some nice moments! Don Sebesky handled the arrangements for this set of larger backings – but Benson's guitar is right out front, hitting some super-dope lines at the best moments, stretching out from the warm Fender Rhodes or horn heavy ... LP, Vinyl record album

Pure Desmond
CTI, 1974. Near Mint- Gatefold
LP...$19.99 (CD...$1.99)
An album of sublime understatement from alto genius Paul Desmond! Desmond was one of the few players who resisted the lure of the 70s electric CTI sound – and stuck pretty much in his usual bag of easy-going grooves, blowing alto with effortless ease, working here with a quartet that ... LP, Vinyl record album