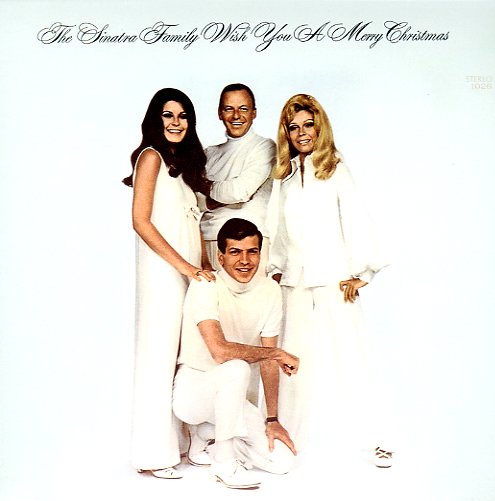 A lost relic in the Sinatra catalog – a 60s Holiday album cut with family members Frank Jr, Nancy, and Tina! There's a definite TV show sort of feeling to the album – as a number of the tunes are done by the whole family, trading verses as they would in a performance – while others have solo members stepping out on their own, delivering sometimes-shaky versions of a few unusual Christmas tunes. As you can imagine, the solo Frank numbers are the ones that are really the best – and the album's worth it alone for the tracks "Whatever Happened To Christmas", one of the saddest Holiday tunes we've ever heard – as well as Frank's re-recording of the excellent "Christmas Waltz", one of the best tunes from his Capitol Christmas album. Arrangements are by Nelson Riddle, mostly, and some tracks feature backings by the Jimmy Joyce Singers. Nancy sings "It's Such A Lonely Time Of Year" and "Kids", Frank Jr sings "Some Children See Him", Tina sings "Santa Claus Is Coming To Town", and the whole family sings "12 Days Of Christmas", "Bells Of Christmas", and "I Wouldn't Trade Christmas".  © 1996-2021, Dusty Groove, Inc.
(Orange & tan label stereo pressing. Cover has a cutout notch.)

Harlem Butterfly – Lorez Alexandria Sings The Songs Of Johnny Mercer Vol 2
Discovery, 1984. Very Good+
LP...$9.99
Another soulful set of jazz standards that pairs the great Lorez with a group led by Gildo Mahones. Gildo's always been one of the best piano players we've heard accompaning a vocalist, and his work with Lambert, Hendricks, & Ross is the stuff of legends. This group has the added benefit of ... LP, Vinyl record album