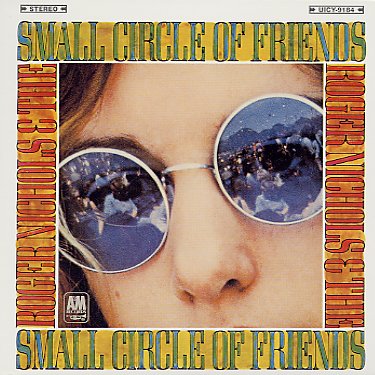 Roger Nichols & The Small Circle Of Friends (with bonus tracks)

One of our favorite records of all time – a landmark piece of 60s pop that we'd easily rank with the best work by Brian Wilson, Millennium, Gary Usher, Van Dyke Parks, or any of those other California sunny-eyed hipsters! The style is sweet A&M Records vocal pop – with an emphasis on groovy harmonies in a male/female style that reminds us of We Five or The Free Design – but a lot hipper too, as its more adult in its themes – with this way of bringing innocence into play with mature thoughtfulness, but in subtle modes that are perfect for the unique album's placement on A&M! Nichols would later be known for his songwriting with Paul Williams, and was also part of a core group of underground LA pop luminaries that included the whole Warner crew under Lenny Waronker – and this album definitely has some of the sly undertones of some of the hippest late 60s Warner work as well. Titles include "Snow Queen", "Love So Fine", "Don't Take Your Time", "Can I Go", and "Kinda Wasted Without You". CD features 8 more bonus tracks that include "Our Day Will Come", "Love Song, Love Song", "Just Beyond Your Smile (mono 45)", "I'll Be Back (mono 45)", "Let's Ride" and more – plus extensive new liner notes!  © 1996-2020, Dusty Groove, Inc.