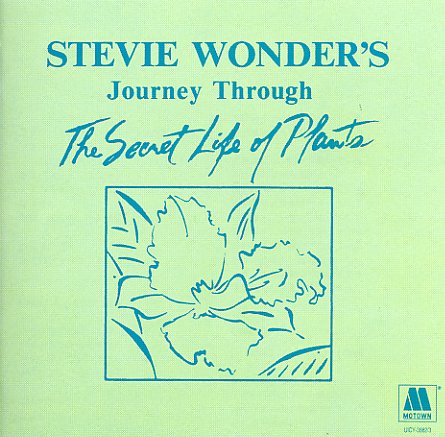 Very high concept work from Stevie Wonder! The record is, in fact, about the "secret life of plants" – partially used as a soundtrack for a film of the same name, but also acting as kind of a storybook in itself! Stevie's exploring a wide range of plant life and plant themes on the set – often in a way that has his keyboards taking center stage in little symphonies of soul that unfold like the petals of a flower in the morning sun – and which stand out as quite different from some of his vocal work, marking him as a talented electronic musician in his own right. Many tracks do have lyrics, too – often with themes of growing, seeding, and other garden metaphors that are easily translated to the human experience. Titles include "Secret Life Of Plants", "Outside My Window", "A Seed's A Star", "Race Babbling", "Black Orchid", "Send One Your Love", "Tree", "Come Back As A Flower", and "Ai No Sono".  © 1996-2022, Dusty Groove, Inc.
(In the tri-fold braille cover, with a cutout notch, faint stain, unglued seam.)

Eddie Kendricks
Tamla, 1973. Very Good
LP...$4.99 6.99
A legendary album from the great Eddie Kendricks – a set that not only has the singer soaring on the kind of sublime old school vocal numbers he always did so well – but one that also has Eddie stepping out into some great dancefloor modes that would have a huge impact for years to come! ... LP, Vinyl record album