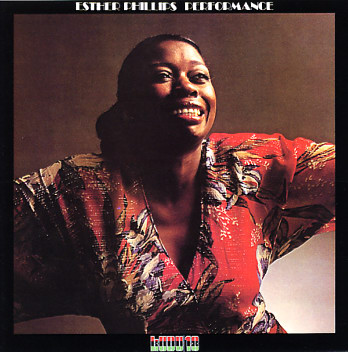 Not a live album – as you might think from the title – but a tight batch of tunes that shows the full funk and soul talents of the legendary Esther Phillips! The album's got a nicely dark undercurrent at times – a sound that's not as smooth as some of Esther's other Kudu albums from the 70s, with bits of R&B bubbling underneath the more contemporary arrangements. Backings are penned by Pee Wee Ellis and Gary King – and players include Bob James and Richard Tee on keyboards, Hubert Laws on flute, and Bernard Purdie and Steve Gadd on drums – the latter of whom provides a sublime beat on the album's standout funky number "Disposable Society" – one of those great little groovers that never did anything for Esther at the time of its release, but which has really gotten rediscovered in recent years! Other tracks include "Doing Our Thing", "Living Alone", "Can't Trust Your Neighbor With Your Baby", and "I Feel The Same".  © 1996-2022, Dusty Groove, Inc.
(Includes Kudu inner sleeve.)

Reflections Of Country & Western Greats
Lenox/Ember (UK), 1962. Near Mint-
LP...$49.99
A landmark album – not only for Esther Phillips, who's emerging here as a gifted young lady, very different from her R&B years, but also for the genre of country soul, which was emerging to be one of the most important strands in the new music during the 60s! Esther's not fooling around ... LP, Vinyl record album

For All We Know
Kudu, 1975. Near Mint-
LP...$7.99
Smooth and sophisticated grooving from Esther Phillips – a record that really has her shaking off the rag-tag and rootsy modes of earlier years, and gliding sweetly into the mainstream! Phillips' vocals are still as soulful and compelling as ever, but the backings are quite full – ... LP, Vinyl record album