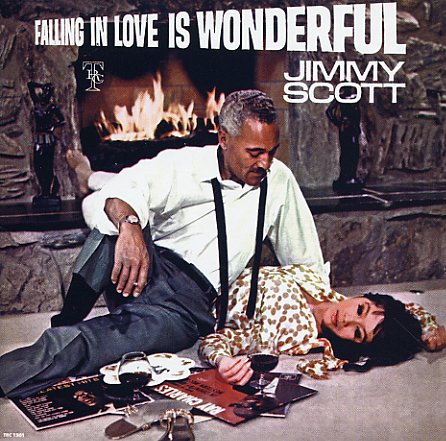 Falling In Love Is Wonderful

Perhaps the rarest of all Jimmy Scott albums – and perhaps the best, too! Jimmy cut this one for Ray Charles' Tangerine label (it was the label's first) – a fact that's driven home on the front cover, where a lounging sexy couple is reclining in front of a fire with a bottle of wine and two of Ray's albums from the time! The real star here, though, is Jimmy – who lays down some of the best vocals of his career over totally sympathetic arrangements by Marty Paich and Gerald Wilson, carefully crafting sad lonely versions of standards like "There Is No Greater Love", "They Say It's Wonderful", "Someone To Watch Over Me", and "How Deep Is The Ocean". Jimmy makes these tunes all his own, singing the songs in that wispy fragile gender-bending way that's always been both his biggest strength and greatest curse!  © 1996-2022, Dusty Groove, Inc.
(Original white label mono pressing! Vinyl plays with some faint crackle, a bit louder on Side 2. Cover has clear tape on all sides, with extensive notes in pen in back.)