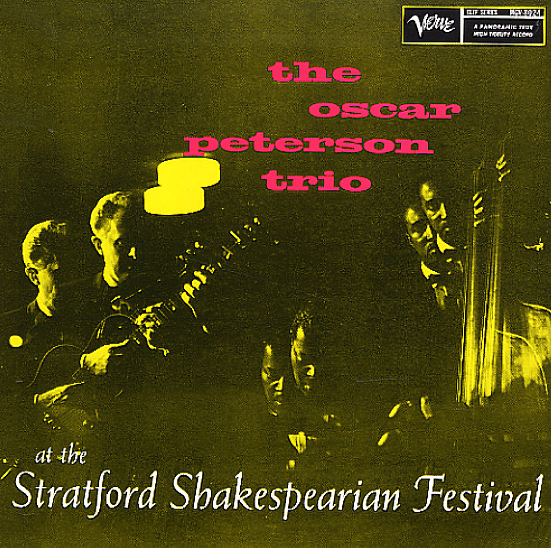 A near-lost gem in Oscar Peterson's mid-50s catalog for Verve – and a sparkling set of trio numbers recorded at the Shakespeare Festival in Ontario! Despite the literate setting of the recording, the work's never stuffy or academic – and Peterson swings things mightily with his trio that includes Herb Ellis on guitar and Ray Brown on bass. The recording quality is wonderful – deep, rich, and luminous – at a level that almost makes us say "why didn't they stop here, since Oscar sounds so perfect?" Titles include "Love You Madly", "52nd Street Theme", "Flamingo", "How About You", and "Noreen's Nocturne".  © 1996-2021, Dusty Groove, Inc.
(Mono MGM pressing. Includes the Verve inner sleeve. Cover has a cutout hole.)

Little Richie Varola
Verve, Late 60s. Near Mint-
LP...$16.99
Obscure album of swingin' organ tracks on Verve, played by a youthful organist named Little Richie Varola. Most of the stuff has sort of a stompin' R&B organ feel to it, but there's a nice version of "Who's Afraid of Virginia Wolf?" that has a great groove to it. Also includes nice ... LP, Vinyl record album

Organ Grinder Swing
Verve, 1965. Very Good+ Gatefold
LP...$19.99
No hokey organ grinder here – no monkey on a leash, begging for change on a street corner – just a smoking little trio session that stands as one of the best records that Jimmy Smith ever recorded for Verve! The album's got a groove that's similar to Jimmy's early years at Blue Note ... LP, Vinyl record album

Greatest Trumpet Of Them All
Verve, 1960. Very Good+
LP...$19.99
One of the strongest sides to feature Diz's mid 50s format – a larger group than usual, an octet, with a more tightly arranged style that showed that he continued to develop as an artist long after the days of his early bop sides. The album's also noteworthy for demonstrating Dizzy's great ... LP, Vinyl record album