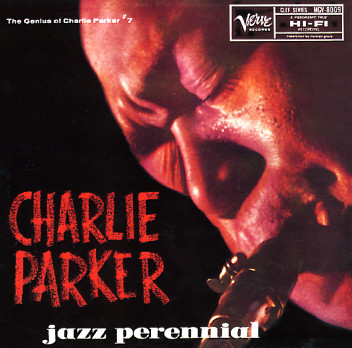 One of our favorite of Verve's "genius of" collections of Charlie Parker's work – largely because it includes some wonderful and oft-overlooked vocal tunes! 4 of the tracks on the set feature Bird blowing with a vocal chorus arranged by Dave Lambert – in a style that shouldn't work, but does – thanks to Lambert's keen bop sensibilities (heard here before his Lambert Hendricks & Ross years), and to players in the group that include Hal McKusick, Max Roach, and Charles Mingus. Other tracks have Parker either playing in a quartet with Buddy Rich, Ray Brown, and Hank Jones – or in a different group with Kenny Dorham and Tommy Turk. Titles include "Cardboard", "Visa", "Segment", "Passport", "Diverse", "I'm In the Mood For Love", "If I Love Again", and "Star Eyes".  © 1996-2020, Dusty Groove, Inc.
(80s Japanese pressing, UMV 2617, including the insert.)