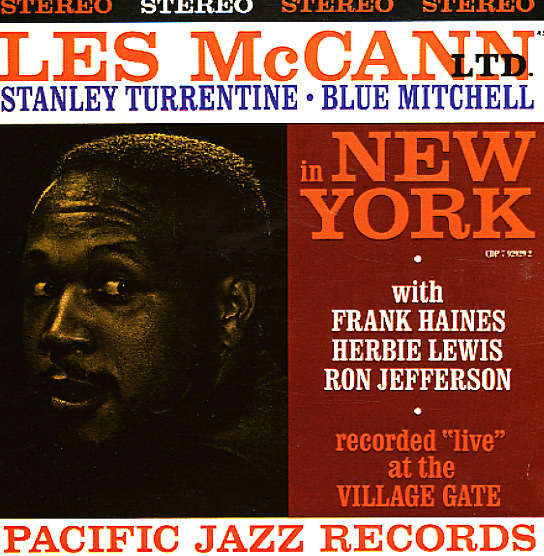 A killer live set by Les McCann – a rare 60s outing that moves past his more familiar trio format, and adds some horn players to the mix! The change is wonderful – as the set features work from Blue Mitchell on trumpet, and both Stanley Turrentine and Frank Haines on tenor – players who work with Les on longer tracks that really pick up an even stronger 60s soul jazz vibe than before – while McCann handles piano with his core group that includes Herbie Lewis on bass and Ron Jefferson on drums. The set feels much more like a Blue Note title than some of Les McCann's other Pacific Jazz material of the early 60s – and Ttitles include "Cha Cha Twist", "Chip Monck", and "Maxie's Changes".  © 1996-2022, Dusty Groove, Inc.
(Blue and silver label stereo pressing – vinyl and cover are nice.)

Soul Hits
Pacific Jazz, Mid 60s. Very Good+
LP...$16.99
A really hard-hitting groover from the great 60s trio of Les McCann – a set that adds in some extra guitar from Joe Pass, who definitely sounds his most soulful on the set! Joe grooves perfectly with Les' piano – and has almost a Kenny Burrell-like depth in tone throughout – one ... LP, Vinyl record album

Les McCann Ltd Plays The Shout
Pacific Jazz, 1960. Very Good
LP...$4.99
A classic album in the mode of soul jazz piano grooviness that put Les on the map, even back in the early days! The album was recorded live at The Bit, on the Sunset Strip, in LA – and it features Les' classic group with Leroy Vinnegar on bass and Ron Jefferson on drums. Tracks are short ... LP, Vinyl record album

Lighthouse '68 (Applause)
Pacific Jazz, 1968. Very Good+
LP...$7.99
One of their many fantastic live sets from The Lighthouse – just about all of which are excellent. This one's one of their best, and features a few beautiful longer tracks that have a spiritual soulful vibe that you don't always get from the group. These tracks include "Native ... LP, Vinyl record album

New One!
Pacific Jazz, 1967. Near Mint- Gatefold
LP...$7.99
Very hard-burning work from Buddy's hip band of the mid 60s – a large ensemble, but one that features searing horn parts that cut through the bigger arrangements with ease! Buddy really had an ear for tuning power with personality at this point in his career – and although the group ... LP, Vinyl record album