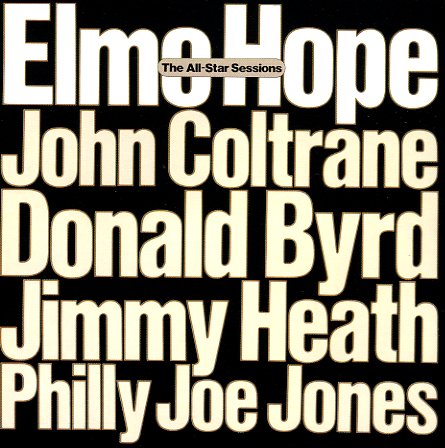 2 of the few sessions that pianist Elmo Hope cut as a leader in groups with horn players – back to back in a 2LP set, with great notes! The first disc on the set features material from the album Informal Jazz – a 1956 blowing session with Hope on the keys, and a great group that includes Donald Byrd, John Coltrane, and Hank Mobley – plus Paul Chambers on bass and Philly Joe Jones on drums. The 4 tracks from that session are all nice and long, with plenty of solo space – and titles include "Weeja", "Polka Dots & Moonbeams", "On It", and "Avalon". Next up is material from the album Homecoming – a great little album that Hope made upon his return to the east coast in the early 60s, not too long before he passed away. Half the tunes are cut with a sextet that features Blue Mitchell, Frank Foster, and Jimmy Heath – and the other are cut with a trio that features Hope, Percy Heath, and Philly Joe Jones, who provide the rhythm for the sextet tunes. The mix of settings is about half and half – and titles include "Moe Jr", "La Berthe", "Eyes So Beautiful", and "One Mo Blues". It's great to hear Hope back with horns, after cutting so many trio sides during this point in his life – and his unique style on the keys is still matched nicely with the larger group of players.  © 1996-2022, Dusty Groove, Inc.
(70s issue. Cover has a cut corner and light ring wear.)

Om
Impulse, 1965. Very Good+ Gatefold
LP...$79.99
A pure statement of being and essence – and one of John Coltrane's spiritual masterpieces from the 60s! The 1965 recording was one of Trane's most adventurous so far – as it featured just one album-length track, building up out of relatively free expressions from Coltrane in the studio ... LP, Vinyl record album