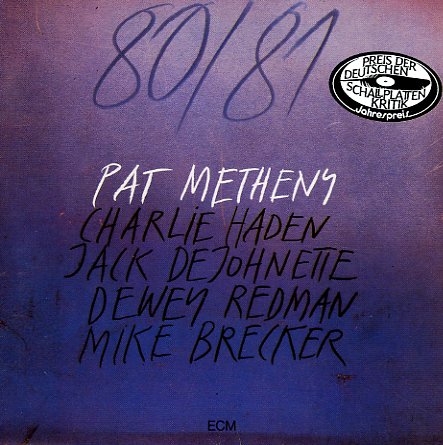 One of the most striking Pat Metheny albums of the period – as the set features the guitarist working with an all-star group that actually features 2 horn players! The group's a quintet, with Dewey Redman and Michael Brecker on tenor sax – blowing in open and spacious modes that complement the sound of Metheny's guitar nicely and really give the set a different feel. The rest of the group features Charlie Haden on bass and Jack De Johnette on drums – and the double space of the set is well used on a set of tracks that includes "Two Folk Songs", "The Bat", "Turnaround", "Open", "Pretty Scattered", and "Goin Ahead".  © 1996-2022, Dusty Groove, Inc.
(Original German pressing. Cover has a German award sticker. A beautiful copy!)