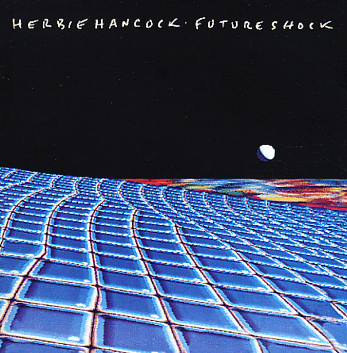 The future is now! Or at least it seemed to be back in 1983 when Herbie teamed up with Bill Laswell to record this classic album of computer-driven keyboard grooves! Whatever you might think of the music, the record was a genius move for Herbie – who was kind of flopping around in a number of different styles on previous albums, most of which we like, but none of which seemed to earn him the same cred as his albums in the 70s. Well this one not only earned him plenty of cred, but also a lot of cash, and continued assurance to Columbia that their contract with Herbie was well-placed – and it certainly cast Bill Laswell into the spotlight as well, given that his efforts really provided the core of the album. Tracks include "Rockit", "Earth Beat", "Future Shock", "Autodrive", and "Rough".  © 1996-2023, Dusty Groove, Inc.
(Cover has light wear and an index sticker.)

Head Hunters
Columbia, 1973. Very Good+
LP...$39.99 (CD...$3.99, LP...$41.99)
A seminal jazz funk session of the 70s – Herbie Hancock's legendary meeting with The Headhunters, and a killer batch of tunes that really gave the combo their name! Herbie's playing a wide range of keys here – including Fender Rhodes, clavinet, and Arp – but almost even better is ... LP, Vinyl record album

Best Of Herbie Hancock (Blue Note)
Blue Note, 1960s. Very Good+ 2LP Gatefold
LP...$19.99
Very nice 2LP set that collects some of Herbie's best 60s work for Blue Note – and which moves past the hits to feature some nice gems from hard to find albums. This work is a beautiful mix of tight soul jazz and freer modal playing – and nearly every track's a perfect example of why ... LP, Vinyl record album

Time Out
Columbia, 1959. Very Good+
LP...$24.99 (CD...$1.99)
Easily the crowning moment of genius for the legendary Dave Brubeck Quartet – the moment when all things came together magically, and the group somehow elevated themselves to a whole new level in jazz! At the time of the set, Brubeck, Paul Desmond, and the rest had already been making plenty ... LP, Vinyl record album

Bravo Brubeck
Columbia, 1967. Near Mint-
LP...$11.99 (CD...$4.99)
Bravo Brubeck, indeed – as this great live set not only has the Brubeck quartet in Mexico, working through some surprising Latin-themed tunes – but also includes some added percussion and guitar, which brings a whole new dimension to their sound! The album's still got the core Brubeck ... LP, Vinyl record album