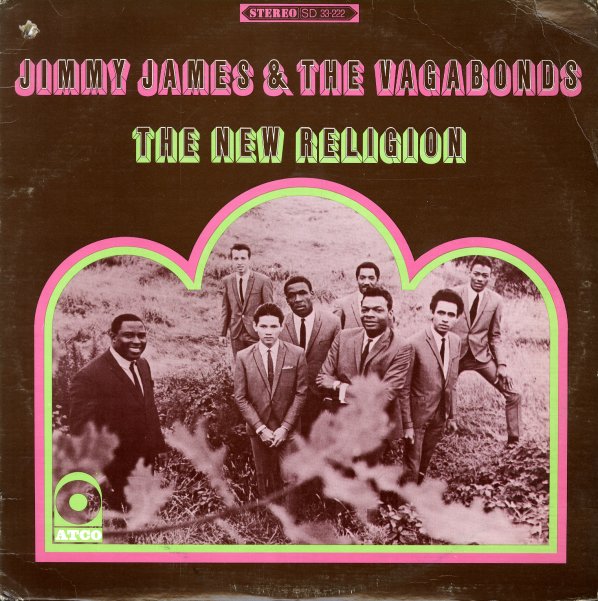 Although they were a UK soul act, Jimmy James and The Vagabonds were a perfect match for the Atlantic soul stable of the 60s. The group had a smooth group style that was partly uptown, partly northern soul – as clearly illustrated in this album, which is divided up into a "mood red: you feel like leaping" side, and a "mood blue: you feel like digging deeper" side. The band chose some good material that really helps them maintain a solid socking soul sound – including "The Entertainer" and "Ain't Love Good, Ain't Love Proud" by Tony Clarke, "Ain't No Big Thing" and "I'm Just A Fool For You Girl" by Gerald Sims, and "Little Boy Blue" and "People Get Ready" by Curtis Mayfield. Also features "Come To Me Softly", a sweet dreamy ballad by Jimmy, and kind of a bit crossover hit for the boys.  © 1996-2021, Dusty Groove, Inc.
(Original white label promo! Vinyl has some light surface marks from the old paper sleeve, but is great overall.)

Come To Me Softly
Atco, 1968. Very Good+
LP...$13.99
Jimmy James and his Vagabonds were a UK group, but they scored nicely in the US with this classic Atlantic side, which was licensed from Pye UK. The record includes their own big hit "Come To Me Softly", plus a number of other soul covers – like "I'm Just A Fool For You ... LP, Vinyl record album

Love Man
Atco, 1969. Near Mint- Gatefold
LP...$34.99
A key posthumous release from Otis Redding – material recorded in 1967 before his untimely early death, released in 1969 to a very eager audience for work from the late soul singer! The album's a bit less classic than some of Redding's earlier Stax sides, but is still head and shoulders ... LP, Vinyl record album

Soul Clan
Atco, Late 60s. Very Good
LP...$11.99
Incredibly memorable stuff – and one of the greatest moments in Atlantic soul history! The Soul Clan is an assemblage of Atlantic's biggest male singers at the time – Joe Tex, Ben E King, Don Covay, Arthur Conley, and Solomon Burke – and the team trade lines back and forth in ... LP, Vinyl record album

Shake, Rattle, & Roll
Atco, 1967. Very Good
LP...$29.99
The second Arthur Conley album for Atlantic – and like the first, a record that really cooks with some great Otis Redding production! The sound and style is very similar to Otis' work for Stax during the 60s – but the album was recorded at Fame Studios in Muscle Shoals, with ... LP, Vinyl record album