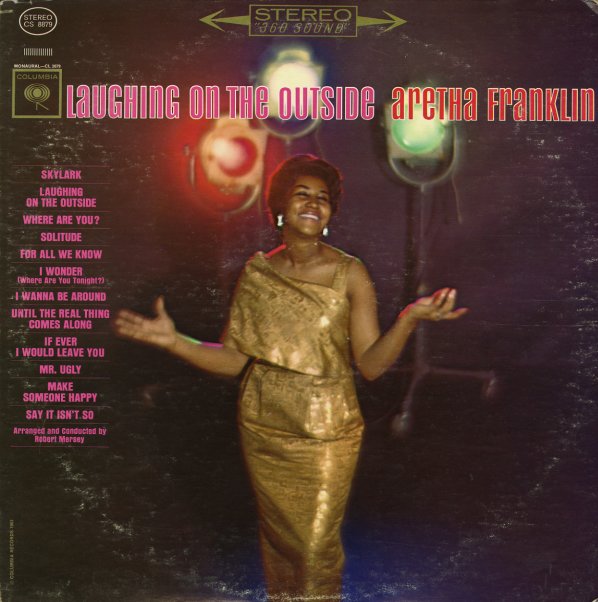 Laughing On The Outside

Hey, we love this record! It's jazzy, and not at all like Aretha's soul sides for Atlantic – but Aretha's vocals sound wonderful on the record, in a completely different way than on later albums. Arrangements are by Robert Mersey, and they've got a feel that's similar to some of the classic Ray Charles large group recordings for ABC – with slightly churchy backings behind the lead vocals, which are right out front in the set, and almost warmer than on other albums. Aretha sings mellow versions of standards like "Skylark", "For All We Know", "Until The Real Thing Comes Along", and "Where Are You?" – plus the obscure "Mr Ugly".  © 1996-2022, Dusty Groove, Inc.
(360 Sound stereo pressing with white text – 1E/1G. Cover has some wear, moderate aging on the back, a split top seam and partially split spine and bottom seam.)

Who's Zoomin Who?
Arista, 1985. Very Good+
LP...$4.99
A huge hit for Aretha Franklin – and a record that brought her famous vocals to a whole new generation of listeners! The sound is definitely different than before – a change from both the deep soul of Atlantic years, and the initial classy approach of her time at Arista – and ... LP, Vinyl record album

Aretha (1980)
Arista, 1980. Very Good+
LP...$6.99
Classy later soul from Aretha Franklin – a set that's free from some of the too-commercial modes of other 80s work, but which still pushes the envelope nicely from her years at Atlantic! Production is both by Arif Mardin and Chuck Jackson – the former one of Franklin's best ... LP, Vinyl record album