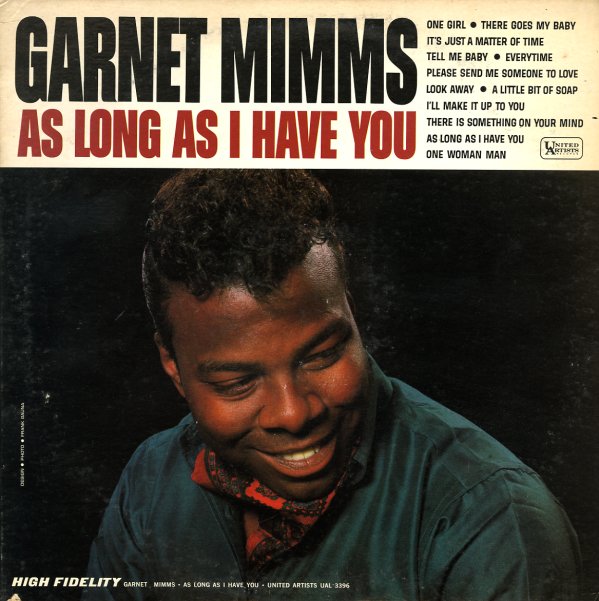 As Long As I Have You

A classic set by one of the greatest soul singers of the 60s – filled with strong original tunes taken completely over the top by Garnet's incredible vocals! The style is completely sublime – a unique blend of the rough and the smooth that would be taken up by other singers in years to come, but which somehow never sounded as fresh and new as it did on this set. Arrangements are sublime – a masterpiece in understatement by Garry Sherman – and the Jerry Ragovoy production on the set is at once spacious and intimate, in a manner that's still leaving us scratching our heads at its brilliance over 40 years later! Titles include "One Girl", "There Goes My Baby", "As Long As I Have You", "It's Just A Matter Of Time", "Tell Me Baby", "Every Time", "One Woman Man", "There Is Something On Your Mind", and "Look Away".  © 1996-2021, Dusty Groove, Inc.
(Japanese pressing, with obi! Back cover has some very light aging, but front looks great.)

Add A Little Love
United Artists, 1972. Very Good
LP...$9.99
Righteous soul from Geri Granger – an album recorded with kind of a rootsy, churchy feel – probably more aimed at the college kids than the mainstream soul audience of the early 70s. The whole thing's fine overall – just maybe a bit too righteously rocking for its own good. ... LP, Vinyl record album

Greatest Hits
United Artists, Early 70s. Near Mint-
LP...$19.99
A monster set of Chicano funky grooves from LA – most of which forever transformed the sound of funk! The album includes most of the band's best cuts – like "Slippin Into Darkness", "Cisco Kid", "World Is A Ghetto", "All Day Music", "Me & ... LP, Vinyl record album

Safety Zone
United Artists, 1975. Very Good+
LP...$11.99
Sweet funky soul from the great Bobby Womack – a record that mixes Bobby's roots with some of the more righteous modes he picked up on Across 110th Street – blended here in a style that's completely sublime! The record was one of Womack's first to be entirely recorded on the west coast ... LP, Vinyl record album

One Step Further
United Artists, 1969. Near Mint-
LP...$9.99
This record was produced by Henry Jerome and orchestrated and conducted by Joe Renzetti. It features 12 songs and they include "I've Gotta Be Me","To Remind You","This Room", "I'm Never Gonna Be The Same", "Here I Am Again", "Games People ... LP, Vinyl record album