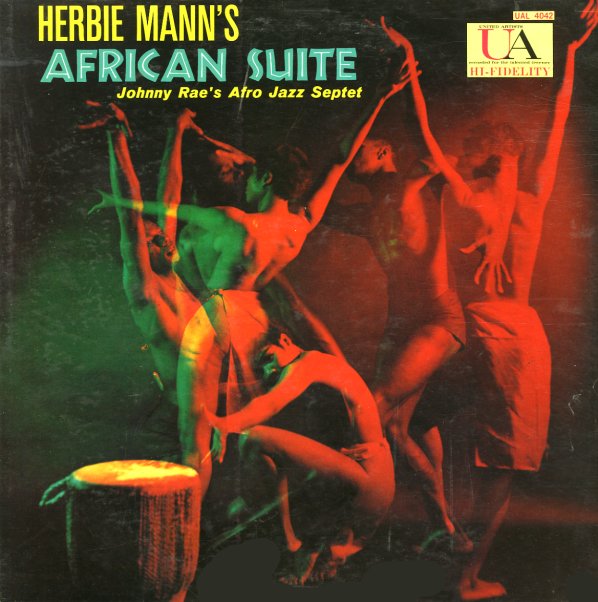 A confusing title, but a wonderful little record! The album's as much a Herbie Mann Latin session as it is a record by Johnny Rae – which is probably why the album's titled as such – and the group on the set features Rae on vibes, Herbie on flute, Jack Six on bass, Philly Joe Jones on drums, Bobby Corwin on piano, and Jose Mangual, Patato Valdes, and Victor Pantoja on an assortment of Latin and African percussion. The groove is tremendous – Latinized jazz, but with a real tension between the heavy percussion on the bottom and the ligher flute and vibes on the top – especially on the album's more tribal, African-styled numbers. The "suite" features 7 tracks in all – 5 composed by Herbie ("Sorimao", "Beouin", "Sudan", "Ekunda", "Guinean"), plus a version of Sonny Rollins' "St Thomas", and the track "Jungle Fantasy" by Noro Morales.  © 1996-2021, Dusty Groove, Inc.
(Red label deep groove pressing. Cover is nice.)

Jazz Combo From I Want To Live!
United Artists, 1958. Very Good+
LP...$6.99
This is the small combo recording of tracks from the legendary jazz score to I Want To Live! Although not featured that prominently in the film, the band of Gerry Mulligan, Art Farmer, Bud Shank, and others were a pretty tight little group – even though it was strange to see this west coast ... LP, Vinyl record album

Bags' Opus
United Artists, 1959. Good+
LP...$6.99
One of the greatest Milt Jackson albums ever – thanks to an incredible lineup that features Art Farmer on trumpet and Benny Golson on tenor – both of whom give the record a lot more edge than usual for Jackson! The set's almost a maturation of the earliest modern grooves that Milt ... LP, Vinyl record album

New Blues Scene
United Artists, 1967. Near Mint-
LP...$1.99
Groovier than before from Buddy Morrow – with versions of "Ode To Billie Joe", "Blue Baroque", "The Teacher", "Gimme Little Sign", "Rescue Me", and "Sunny" – all set to arrangements by Walter Raim! LP, Vinyl record album