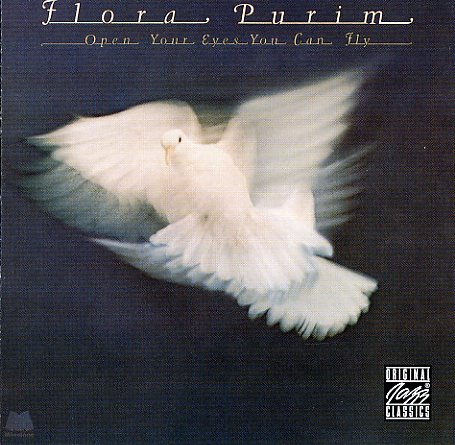 Open Your Eyes You Can Fly

A classic batch of Bay Area Brazilian grooves – recorded in the sweet breezy electric style of the Fantasy studios, and featuring the vocals of the lovely Flora Purim in the lead! The session's got a great mix of Brazilian and American fusion players – including Airto (of course!), Ron Carter, George Duke, Egberto Gismonti, Alphonso Johnson, Robertinho Silva, Hermeto Pascoal, and Ndugu Leon Chancler. Pascoal's reed work is a very nice treat, especially over the warm keyboards of George Duke. Purim's voice is as wonderful as ever, and the album's got lots of nice numbers, like "Ina's Song", "Andei (I Walked)", "Time's Lie", and "Open Your Eyes You Can Fly".  © 1996-2022, Dusty Groove, Inc.
(Record is in great shape, but cover has large peeled patches on the front and back.)

Every Day Every Night
Warner, 1978. Very Good+ Gatefold
LP...$5.99
A beautifully soulful record from Flora Purim – still awash with touches from her Brazilian roots, but also done with a great 70s LA sound! Airto's helping Flora out on production, but the real hero here is Michel Colombier – who handles most of the arrangements and wrote a good deal ... LP, Vinyl record album

Outubro
Milestone, 1980. Near Mint-
LP...$24.99
Wicked early work from Azymuth – one of the albums that the group recorded when they were really starting to take off on the global scene – burning strong with a soulful fusion vibe, lots of Brazilian rhythm currents, and always hitting all the right notes in their music! The sound ... LP, Vinyl record album

Tito Madi A Fossa
London (Brazil), 1971. Very Good+
LP...$24.99
Beautifully sophisticated vocal work by one of Brazil's greatest singers at the end of the 60s. Madi has a style that owes a bit to earlier work by Dick Farney, but which also has absorbed a lot of the better jazz influences of the bossa era – as you'll hear on his readings of tracks like ... LP, Vinyl record album

Saudade Do Brasil (2LP version)
Elektra (Brazil), 1980. Very Good+ 2LP
LP...$24.99
A great little album by Elis Regina – recorded for Warner/Elektra at the end of her career, but very much in the spirit of her classic work for Philips in the 70s. Like so many of those records, this one features arrangements and keyboards by Cesar Camargo Mariano – and the list of ... LP, Vinyl record album

Amar
CBS, 1981. Near Mint-
LP...$6.99
An album with a love-styled title, but one that's a lot darker than you might expect – put together with some of the moodier undercurrents you might find in the work of Maria Bethania, although with Simone's own sense of musical balance overall. The album's got a somber, serious approach at ... LP, Vinyl record album