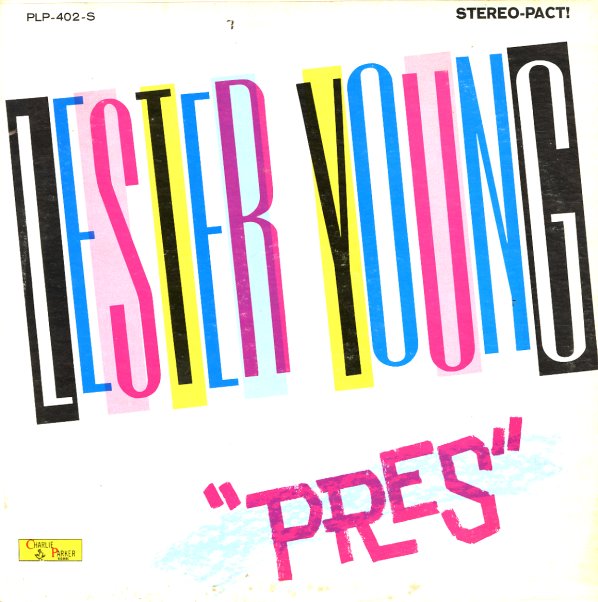 No real date or personnel on this one, and the album's a live set recorded, most likely, at some time in the 50s. The quality of the recording isn't great, and you hear a heck of a lot of crowd noise – but the work's an interesting document of Pres during the period, as the tunes are all quite long, and with a freer, looser sense of improvisation than on some of his studio sides. There's a trumpeter who gets in a lot of licks on the set (Roy Eldridge?) – and titles include "Destination Moon", "I Cover The Waterfront", "Sunday", "Lester Leaps In", and "Blues".  © 1996-2022, Dusty Groove, Inc.
(Yellow label non-gatefold pressing. Cover has some wear.)

Pres – The Complete Savoy Recordings
Savoy, 1944/1949. Near Mint- 2LP Gatefold
LP...$9.99 13.99
Seminal sounds that bridge the worlds of swing and bop – mostly recorded for Svoy in 1944, the earliest days of the label – with a few tracks from 1949 as well – and a number of alternates appearing here for the first time ever! LP, Vinyl record album

Lester Young In Washington DC 1956 Vol 1
Pablo, 1956. Near Mint- Gatefold
LP...$9.99
A lost treasure from Lester Young – previously unreleased live material from the 50s, recorded in a style that's a fair bit different than some of his studio work of the decade! The set took place at the Patio Lounge in Washington, DC – and was recorded by Bill Potts, who is also the ... LP, Vinyl record album

Yusef Lateef (aka Lost In Sound)
Charlie Parker/Everest, 1961. Sealed
LP...$16.99
Yusef Lateef's one and only album for the Charlie Parker label – cut during a period when he's been making real waves in the jazz scene with work on Prestige and Savoy! The set's a bit more straight ahead than some of Lateef's more exotic sides of the time – focusing on his work on ... LP, Vinyl record album