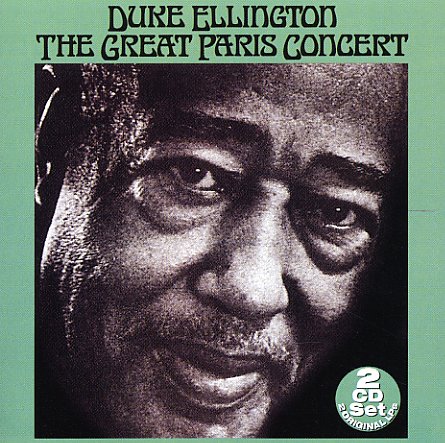 Did Ellington ever record in concert and it not be great? This wonderful double-length set from the 60s is key proof of his genius in an unfettered live setting – recorded in Paris in 1963 with plenty of dark edges! The tracks are short overall, but Duke's really at the head of the group on piano – playing with those angular, modern tones he picked up in the post Money Jungle years – and clearly in charge of the group from the keyboard, not the podium. Horn players include Harry Carney, Ray Nance, Lawrence Brown, Cootie Williams, Johnny Hodges, and Paul Gonsalves – all bringing in some special tones and unique performances to an extended set list that includes both Ellington standards and a few lesser-known numbers. Titles include "Rockin In Rhythm", "Concerto For Cootie", "Suite Thursday", "Tone Parallel To Harlem", "Bula", "Cop Out", "Happy Go Lucky Local", "Theme From Asphalt Jungle", and "Star-Crossed Lovers".  © 1996-2022, Dusty Groove, Inc.
(Green and red Broadway label stereo pressing in the textured cover. Cover has a bit of pencil in back, in great shape other wise.)