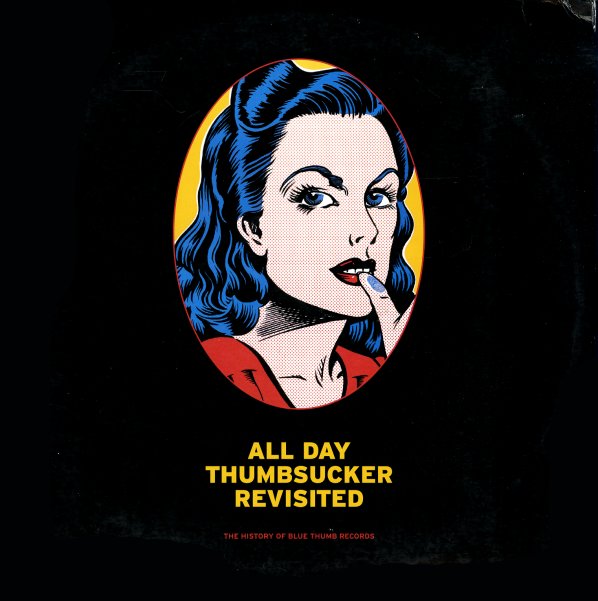 All Day Thumbsucker Revisited – A History Of Blue Thumb Records

A mixed bag of tracks issued in 1995 to celebrate the history of the legendary Blue Thumb label from the 70s – and although there's a lot of rock numbers on here that we could do without, there's plenty of nice bits for groovers, too! Some of the best cuts are from albums that we can hardly ever find on vinyl, and the album's got a mix of jazz, Brazilian, Latin, soul, and funk tunes. Titles include "Bird's Word" by The Last Poets, "Images" by Sun Ra, "Breezin" by Gabor Szabo, "The Frog" by Joao Donato, "Blackbird" by Bossa Rio, "Fat Jam" by Ben Sidran, "Little Mama" by Luis Gasca, "Put It Where You Want It" by The Crusaders, and "Darkness Darkness" by Phil Upchurch.  © 1996-2021, Dusty Groove, Inc.
(Pressed on blue, yellow, and orange vinyl. Includes the poster. Cover has light wear and a cut corner.)

Out Front!
Candid, 1961. Very Good
LP...$14.99
Supremely soulful modern jazz from the great Booker Little – one of his best albums ever as a leader, and a real standout moment amidst so many of the re-titled sessions that came out after his early death! The album's got a tremendous feel from the very first note – a furthering of ... LP, Vinyl record album

Crusaders At Their Best
Motown, 1973. Near Mint-
LP...$4.99 (CD...$2.99)
A really mixed bag of grooves from the Crusaders – but still an album that's quite tasty if you dig their work on the Chisa label! The record appears to be a greatest hits collection – with the "best" in the title – but it's more a summation of the styles they'd been ... LP, Vinyl record album

Quincy's Got A Brand New Bag
Mercury, 1965. Very Good
LP...$9.99
A very groovy set of short jazzy numbers from Quincy – a consummate expression of all the work he'd forged in the 60s on soundtracks and other jazz sides for Mercury! The album features Quincy working through a lot of soul numbers – jamming on them instrumentally with players that ... LP, Vinyl record album