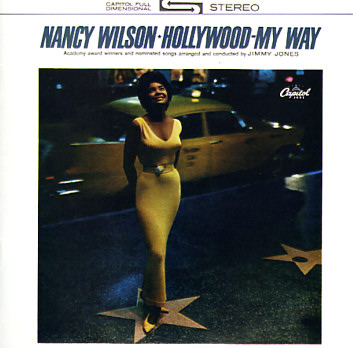 Nancy Wilson turns her wonderfully sophisticated vocal style towards a batch of hits from Hollywood films of the 40s, 50s, and 60s – arranged and conducted by Jimmy Jones, in that classy blend of jazz and soul that suited Wilson so well in the 60s! The style is really a cut above the usual – handled with great poise by Nancy throughout, but also done in a mode that's relaxed enough to get past some of the stodgier sounds of records like this. The mellower tunes are actually some of the best here – personal, reflective, and echoing the "Guess Who I Saw Today" sound of Wilson in the 60s. Titles include "You'd Be So Nice To Come Home To", "Almost In Your Arms", "When Did You Leave Heaven?", "My Shining Hour", "Days Of Wine & Roses", and "Wild Is The Wind".  © 1996-2021, Dusty Groove, Inc.
(Mono blue label pressing. Cover has a cutout hole, light wear, and a name in pen.)