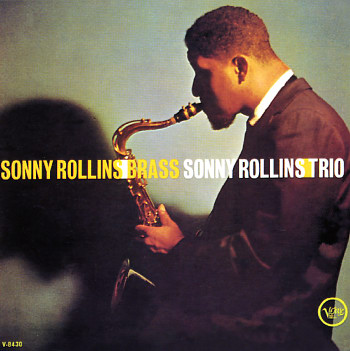 Quite an unusual record for Sonny Rollins – but a great one too! At first glance the concept is a strange one – almost a crazy decision to pair modernist tenorist Sonny Rollins with a set of large brassy arrangements – but oddly, the idea works, and works nicely – as Rollins' edgey solos cut through the heavy arrangements with ease, creating some angular counterpoint and a tight little space to make his own sound. The group was conducted by Ernie Wilkins, and the flipside of the album features Rollins playing in a small trio with the great Henry Grimes on bass (who also played with Rollins on some of his best sessions from the time!) and Charles Wright on drums. Titles include "Manhattan", "If You Were The Only Girl In the World", "Who Cares?", and "Far Out East". Originally issued on MGM/Metro – but this is the Verve pressing.  © 1996-2021, Dusty Groove, Inc.
(Stereo Verve Inc pressing, nice and clean overall – save for two small clicks on the vinyl. Cover has some light wear.)