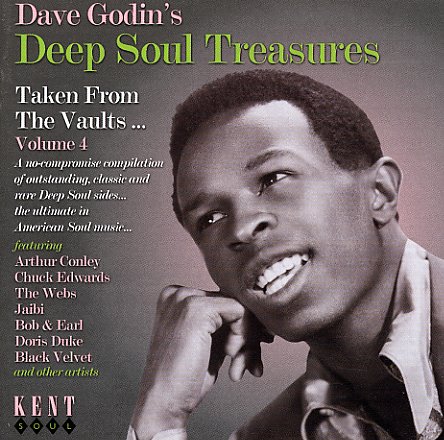 A stunning set of deep soul numbers – all hand-picked by one of the greatest authorities on the music ever! Dave Godin knows this stuff better than just about anyone else – and this 4th volume in his deep soul series may well be the best so far! Godin's experience with the music runs back to the 60s, so it's no surprise that his collection of tunes for the set moves way past the obvious hits – far into the realm of indie soul to come up with some real killers that mix together under-heard gems with a few well-placed classics. The groove is rootsy all the way through – a nice range of soul styles from the time, all annotated by Godin in the CD's excellent set of notes. 25 tracks in all – with titles that include "It's So Hard To Break A Habit" by The Webs, "You Got Me Diggin You" by Roosevelt Matthews, "I Don't Care Anymore" by Doris Duke, "I Made It Over" by Jimmy Robins, "Don't Ever Leave Me" by Bob & Earl, "I'm A Lonely Stranger" by Arthur Conley, "I Love You" by Jackie Lee, "Tracks of My Tears" by The Miracles, "Wrong Too Long" by Matilda Jones, "I Need You" by Chuck Edwards, "Is It Me You Really Love" by Black Velvet, and "I Believe She Will" by Eddie & Ernie.  © 1996-2022, Dusty Groove, Inc.

Dave Godin's Deep Soul Treasures Vol 2 – Taken From The Vaults
Kent/Ace (UK), Late 60s. New Copy
CD...$9.99 18.99 (CD...$8.99)
Deep soul is special soul – a certain breed of soul music that features extremely emotive vocal performances, and the kind of gut-level delivery of lyrics you'd find in the best work by legends like Otis Redding or James Carr! Yet despite the fame of those big names, the style is maybe best ... CD