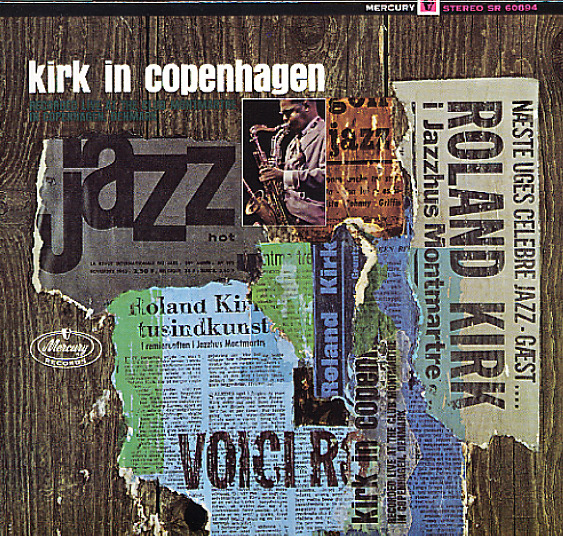 A rare slice of work by Roland Kirk from his early years – a great live set recorded in Europe in the mid 60's – done in a looser mode than his studio sessions from the time! Kirk's playing his usual array of incredible horns – tenor, stritch, flute, nose flute, and manzello – with an international group that features Tete Montoliu on piano, Niels Henning Orsted Pederson on bass, and J.C. Moses on drums. In the setting, there's more of a hardbop feel to the material than on some of Kirk's studio sets – but given Roland's penchant for unusual phrasing, twin-reed blowing, and general free-thinking overall, the sound is pretty unique overall! Titles include "Mingus-Griff Song", "The Monkey Thing", and "On the Corner of King and Scott Streets".  © 1996-2021, Dusty Groove, Inc.
(Mono red label pressing with deep groove! Back cover has some aging.)

I Love John Frigo – He Swings
Mercury, 1957. Very Good+
LP...$14.99
John, aka Johnny Frigo, who's best known to our set for the rare dynamite jazz dance sides he recorded later on, and to the jazz world at large for his work as a bassist, leads a small group on this rare, early full length for Mercury as as a leader on his first instrument – the violin! It's ... LP, Vinyl record album

Profile Of Gerry Mulligan
Mercury, 1955. Very Good
LP...$9.99
A pretty obscure session by Gerry – recorded in 1955, and featuring Jon Eardly on trumpet, Zoot Sims on tenor, and Bob Brookmeyer on trombone. Gerry actually plays a bit of piano, in addition to his usual baritone – and the set bubbles with a lightly swinging, slightly modern feel that' ... LP, Vinyl record album

Catwalk
Mercury, 1977. Near Mint-
LP...$6.99
Not classic Chico – but a pretty darn nice album of fusion tracks, very much in the spirit of other Mercury jazz work from the 1976/1977 generation! The tracks have a nice riffing groove to them – with fast tight drums from Chico, souflul sax work by Arthur Blythe and Gary Gordon, and ... LP, Vinyl record album

Birth Of A Band
Mercury, Late 50s. Very Good+
LP...$19.99
A very swingin, very groovy early album from Quincy – one that's clearly in the big band mode, but handled with soulful touches that really set it apart from the genre! The band is a great one all the way through – and the album features solos by Zoot Sims, Jerome Richardson, Phil ... LP, Vinyl record album