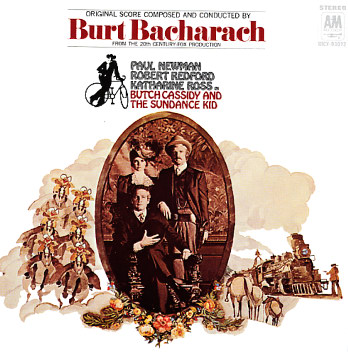 Forget everything you know about "Raindrops Are Falling On My Head", and give Burt kudos for this gem of an album! Sure, "Raindrops" shows up here a few times – instrumentally, and in 2 BJ Thomas vocal versions – and it's not a bad tune at all. But the real gems are some of the instrumentals – which have Burt almost doing a Tijuana take on his classic A&M sound – in a style that's really wonderful! Our favorite cut is the amazing "South American Getaway" – a breezy vocal scatting number that seems to take the best of the Swingle Singers and I Cantori Modern and roll them into one groovy tune that soars, dips, turns, twists, and holds our dear heart close for 5 minutes and 13 seconds! It's a real gem, and worth the price of the album alone – but you'll also get a few other nice ones, like "The Old Fun City", "The Sundance Kid", "Come Touch The Sun", and "Not Goin Home Anymore".  © 1996-2021, Dusty Groove, Inc.
(Brown label pressing. Cover has a Gold Record Award pressing.)

Casino Royale
Colgems, 1967. Near Mint-
LP...$39.99
One of Burt Bacharach's finest moments, and a soundtrack that we never tire of hearing! Burt wrote all the tunes – and the album's a wonderful romp, with lots of odd twists and turns that are quite different from Burt's usual bag (baby!), but which still have all of the charm of his best ... LP, Vinyl record album

Breakfast Club – Original Motion Picture Soundtrack
A&M, 1985. Sealed
LP...$24.99
The soundtrack for one of the most popular John Hughes films of the 80s, and the soundtrack for a generation as well – a mix of songs that were partly pulled from other sources, but which went on to make the idea of a compilation soundtrack every bit as important as a full original film score! ... LP, Vinyl record album