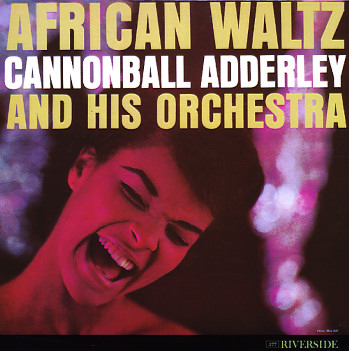 A key early album from the young Cannonball Adderley – an a set that crossed over big, thanks to a mix of strong jazz solos from the leader and very inventive rhythms in the arrangements! The group here is larger than Adderley's usual quintet/sextet lineup – and includes reed work from Oliver Nelson and Jerome Richardson, trombone from Melba Liston, piano from Wynton Kelly, and even a bit of congas from Ray Barretto – all working under the hip leadership of Ernie Wilkins, who crafts these great charts for Cannon to solo over the top! A key moment of genius is the title track – a beautiful reading of Galt MacDermott's "African Waltz" – and other tracks include "Blue Brass Groove", "Something Different", "The Uptown", and "Letter From Home".  © 1996-2022, Dusty Groove, Inc.
(OJC pressing.)

Thelonious Monk Quartet Plus Two at the Blackhawk
Riverside, 1960. Very Good
LP...$34.99
A stunning pre-Columbia session from Thelonious Monk – a really great live date that has Monk's familiar quartet augmented by west coast players Joe Gordon on trumpet and Harold Land on tenor! Given that Charlie Rouse is already in the group on tenor, the addition of Land's horn makes for a ... LP, Vinyl record album