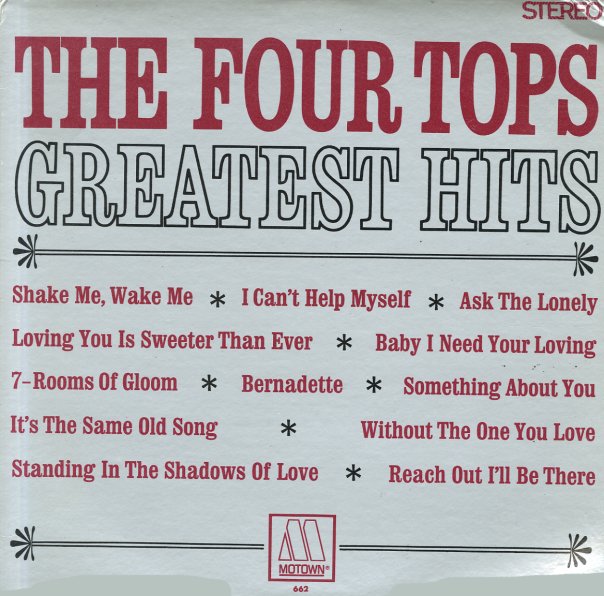 Despite the fame of their big hits – like "Reach Out I'll Be There", "I Can't Help Myself", "Baby I Need Your Loving", and "It's The Same Old Song", all of which are on this set, and which have been heard ad infinitum – the Four Tops are actually a heck of a great vocal group, with harmonies that blew away many of their contemporaries, and which keep their work shining long past the hits. This set's got some nice cuts that fall into that category – like "Bernadette", and "Ask The Lonely" – and the package is about as solid as you'd expect.  © 1996-2021, Dusty Groove, Inc.
(Original stereo pressing. Cover has some wear and masking tape down the spine.)

Reach Out (Natural Resources)
Motown, 1967. Near Mint-
LP...$9.99
A classic 60s album by the Four Tops – really one of their better efforts of the period – a record that finds the group working some soulful magic on a couple of their best known tunes, as well as adding a dose of deeper emotion to some hit songs of the time! Like other Motown success ... LP, Vinyl record album

Main Street People
ABC, 1973. Sealed Gatefold
LP...$11.99
Really nice work from The Four Tops – proof that they were still going quite quite strong after Motown! The album's got a hip sound that shows the group moving through a wider range of emotions than we ever remember – crafting rich deep harmonies that still stand apart from the big ... LP, Vinyl record album

Four Tops On Broadway
Motown, 1967. Very Good+
LP...$9.99
The Four Tops weren't the first of the Motown groups to get the broadway treatment, but they do a pretty nice job with it! Thanks to some swinging help from producer Frank Wilson, the quartet manage to still shine even though they're shackled with a set of tunes from over-blown broadway shows of ... LP, Vinyl record album