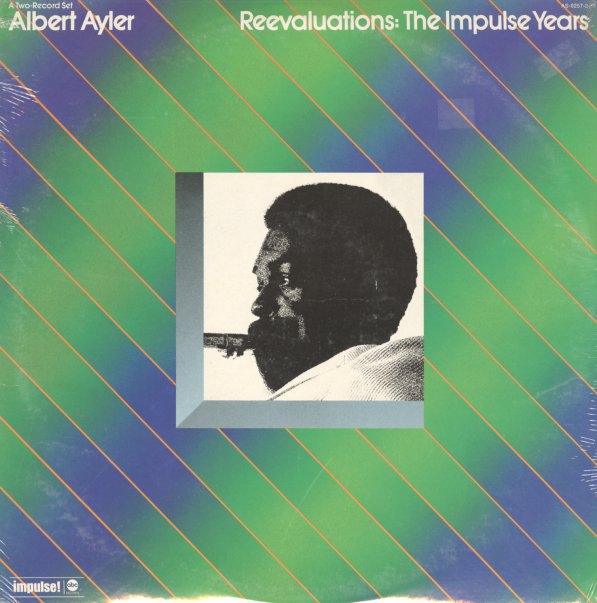 A great collection of Albert Ayler's late work for Impulse – some of his most unusual sides ever cut to wax, and very different from his work on labels like ESP. The general feel is one of searching – as Ayler works in a number of different modes to try to reach new audiences, and hit new sounds. Some of these modes don't always work, but there's a rich emotional honesty to most of the album that keeps things extremely interesting, whatever the format. Titles include "Again Comes The Rising Of The Sun", "For John Coltrane", "Water Music", "Oh! Love Of Life", "Love Cry", "Drudgery", "New Ghosts", and "Holy Ghost". Includes a number of tracks that haven't been in print for years!  © 1996-2020, Dusty Groove, Inc.
(Still sealed! Cover has a cutout mark.)

First Recordings (GNP)
GNP, 1962. Near Mint-
LP...$24.99
Early work by Albert Ayler – and very very striking! The setting is very spare, with only bass and drums backing Ayler up – and the way the album is mixed, Ayler's solos dominate the tracks in a way that isn't always the case with some of the more group-driven later work. His tone is ... LP, Vinyl record album

Desafinado
Impulse, 1964. Near Mint- Gatefold
LP...$29.99 (CD...$4.99, CD...$4.99)
The Hawk, in prime late form, lays down some beautiful tenor solos over gentle bossa nova accompaniment – working in a mode that's much more satisfying than just a "classic player meets bossa" session, angularly crafting the solos with that dark edge that he had in all of his later ... LP, Vinyl record album