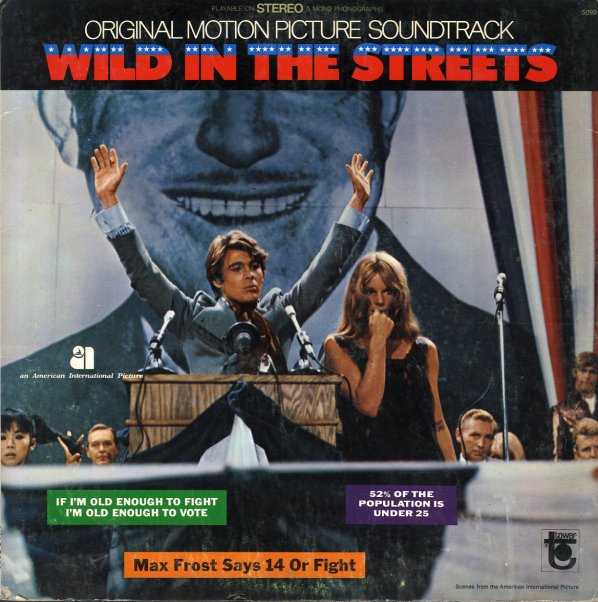 Wild In The Streets

Hilarious! This is the soundtrack to a goofy late 60s shocker film about the time when hippies and young folks would take over America. Les Baxter handled the musical score for the film, but the real treat is the schlocky rock tracks – written by Barry Mann and Cynthia Weil, with arrangements by Mike Curb in that fuzzy Tower/AIP mode! The lyrics are hysterical, but also oddly catchy, even though they're trying to make fun of 60s rock. Titles include "Psychedelic Senate", "Fourteen Or Fight", "Wild In The Streets", "Sally LeRoy", and "Free Lovin".  © 1996-2021, Dusty Groove, Inc.
(In the Unipak cover, with some wear and aging.)

Riot On Sunset Strip
Tower, 1967. Very Good+
LP...$24.99
One of the greatest of the AIP late 60s rock and roll soundtracks – featuring some killer tracks by The Standells, plus a few more by The Chocolate Watch Band, and other odd psyche rock bands of the time! This one's got a feel that's a lot more real rock and roll than some of the other Tower ... LP, Vinyl record album

What Did You Do In The War Daddy?
RCA, 1966. Sealed
LP...$4.99
Kind of nutty stuff from this weird Blake Edwards film that starred James Coburn and Dick Shawn. The material's not as jazz-based as some of Mancini's other scores, but it does have a delightfully nutty sound that's in keeping with the kind of mad 60s film it was written for. The postwar memory ... LP, Vinyl record album