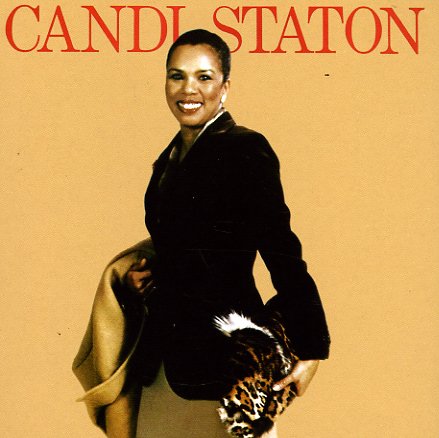 A new day for Candi Stanton – kicking off the 80s with a tighter grooving modern soul sound – and she nails it! Of course, Candi started as a sweet southern soul singer, hit big with her LA single "Young Hearts Run Free", and is here reinventing herself as a sophisticated modern diva. Includes some uptempo material – which she'd cut more of later on for dance labels – but she's even better on the mellower tracks, especially the spacey "Halfway To Heaven", and the moody "Living Inside Me". Other tracks include "Looking For Love", "It's Real", and a remake of "The Hunter Gets Captured By The Game".  © 1996-2023, Dusty Groove, Inc.
(Original pressing. Cover has waviness from moisture, some staining, and a promo stamp.)

Purple Rain
Warner, 1984. Very Good+
LP...$19.99 (CD...$2.99)
One of the greatest crossover albums of the 80s – and the record that catapulted Prince very firmly into the mainstream! There's a tightness here that surpasses even that of Prince's early classics for Warner Brothers – an unabashed love of a pop hook that makes for some incredibly ... LP, Vinyl record album

Is It Still Good To Ya
Warner, 1978. Very Good+
LP...$6.99
Ashford & Simpson don't need to ask at this point – their in full 70s soul stride here, and it's not good, it's great! By this point in the late 70s, Nick and Valerie are firmly holding the foreground as artists in their own right after many years of acting as songwriters for other soul ... LP, Vinyl record album

Just As I Am
Sussex, 1971. Very Good
LP...$39.99
A beautiful album by Bill Withers – filled with incredibly well written songs, and an amazing instrumental technique that blended folksy elements with smoother 70s soul, in a sound that would put Bill at the top of the charts for many years, yet still give him cred with soul fans for decades! ... LP, Vinyl record album