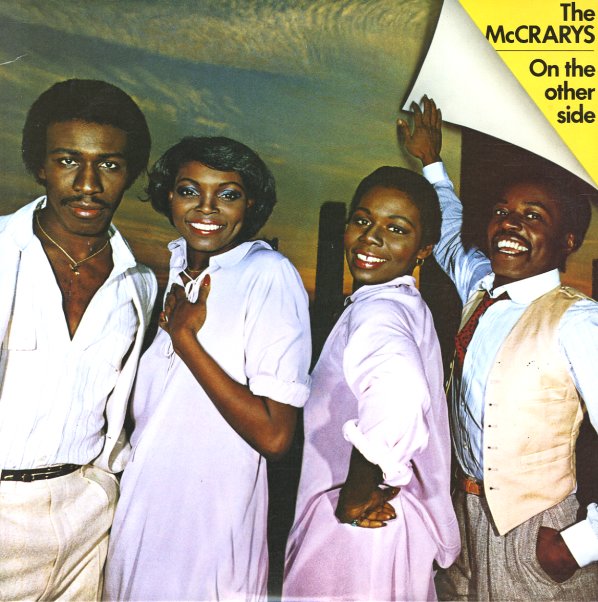 On The Other Side

Soaring vocals and wickedly groovy arrangements – a beautiful blend that may well make this the greatest album The McCrarys ever cut! The backings here are even better than before – upbeat, but with lots of jazzy inflections that almost feel like some of the best 80s grooves on Capitol records – and the vocals are tight, but deeply soulful – always proud to show off the group's roots in gospel, yet definitely trained towards a secular soul sensibility too. The album's got loads of gems – and titles include "On The Other Side", "I'm For Real", "Isn't It Deep", "Starbright", "Dance With Me", "Lost In Loving You", and "Your Smiling Face".  © 1996-2021, Dusty Groove, Inc.
(White label promo. Cover has light wear and aging, with a promo stamp and tracklist sticker on back.)

Sunshine Day
Light, 1972. Very Good+
LP...$11.99
Beautiful early work from The McCrarys – billed here in a non-plural form as "The McCrary", in the years before they moved onto secular soul for the bigger labels! The album's got a great soul-based feel that goes beyond its gospel roots – a playful sing-song quality that's ... LP, Vinyl record album

Diamond Life
Portrait, 1985. Near Mint-
LP...$49.99
A damn great soul album! Sure, the record was a crossover classic that got played to death back in the 80s – but give it a listen now, and you'll be stunned to hear how fresh it sounds, and how much it reminds you of all the British soul acts that sprung up in the years after it was released. ... LP, Vinyl record album