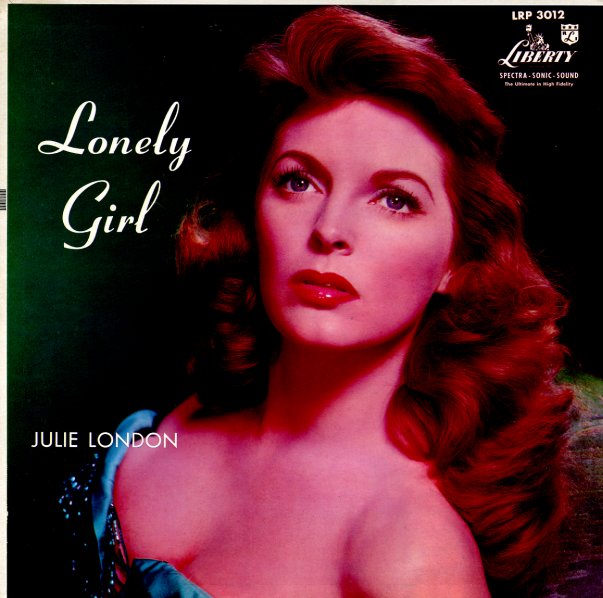 Looking like she does on the cover, it's hard to imagine Julie London being a lonely girl – as she's very seductively posed, with that slinky bare shoulders look that no doubt helped many of her early Liberty sides sell so well! But apart from the cheesecake, the record's one of Julie's perfect late 50s sides for Liberty – spare, moody, and very smoky – all set to mellow accompaniment, and backed by some nice guitar work by Al Viola. Tracks are short and sad, and titles include "Fools Rush In", "What'll I Do", "Lonely Girl", "When Your Lover Has Gone", and "Mean To Me".  © 1996-2023, Dusty Groove, Inc.
(Mono turquoise label pressing with deep groove. Cover has a split top seam, small sticker remnants, some surface wear and aging, and some unglueing at the corners of the front paste-on.)

Julie Is Her Name
Liberty, Late 50s. Very Good+
LP...$19.99
A landmark album in 50s vocal jazz – spare, moody, and evocative tunes from Julie London – sung in a stripped-down setting that few other singers would dare at the time! The sound of the set is as sexy as the cover – intimate, personal, and breathily sung in a mode that comes ... LP, Vinyl record album

Bobby Troup & His Trio
Liberty, Late 50s. Very Good+
LP...$11.99
Very hip work from one of the coolest cats of the 50s – the amazing Bobby Troup, heard here at the height of his powers in a very sweet setting! The group's actually a quartet – given that Bobby's on piano, alongside Howard Roberts on guitar, Bob Enevoldsen on bass, and Don Heath on ... LP, Vinyl record album

Love Songs Of Mr B
EmArcy, Mid 40s/1954. Very Good
LP...$6.99
This is a collection of some of Eckstine's love songs mainly from singles from around 1945. His voice sounds great on these ten songs and they include "Prisoner Of Love", "I Love The Loveliness Of You", "You Call It Madness", "Time On My Hands", "Where ... LP, Vinyl record album

I Miss You So
Atlantic, 1956. Very Good
LP...$11.99 (CD...$14.99)
A beautiful title for a beautiful record – one that sums up the subtle sense of sadness that makes the work of Chris Connor so great! There's a sense of longing here that steps out from the very first tune – one that's beautifully moody, without being overindulgent or too emotive. ... LP, Vinyl record album

Back To The Blues
Roulette, 1962. Very Good
LP...$11.99
A bit different than some of Dinah Washington's other 60s work for Roulette – a set that's not entirely back to the blues promised in the title, but one that's definitely got a strong bluesy undercurrent! The backing's, by Fred Norman, aren't nearly as lush as on other Roulette sessions ... LP, Vinyl record album