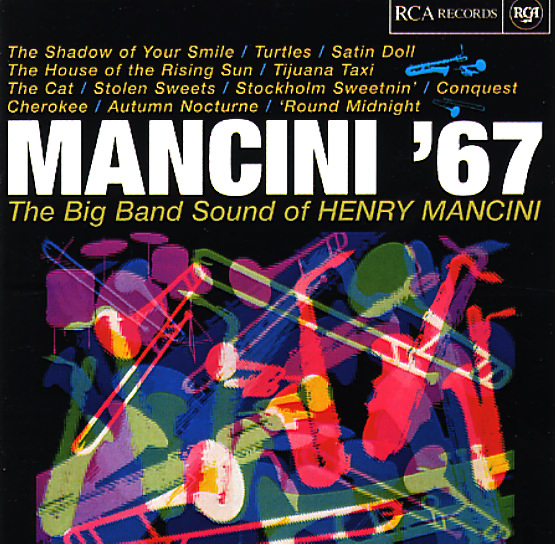 Henry Mancini in 1967 – a time when he was definitely at the height of his powers, as you'll hear on this sweet set of big band recordings! The format here is much more jazz-based than some of Hank's soundtracks from the time – played with a great group of west coast musicians who include Pete Candoli and Jack Sheldon on trumpets; Ronny Lang, Plas Johnson, Harry Klee, and Ted Nash on reeds; Jimmy Rowles on piano, Bob Bain on guitar, and Larry Bunker on vibes – all great players who really have a way of coming together beautifully, then stepping out to bring their own voices strongly to the tunes. And although there's a few soundtrack tunes on the set, most of the compositions are jazz numbers – not penned by Mancini, but definitely given his touch in the arrangements for the date. Titles include "Stockhom Sweetnin", "Tijuana Taxi", "Round Midnight", "The Cat", "Stolen Sweets", "The Shadow Of Your Smile", and the great fuzz guitar sounds of "Turtles".  © 1996-2022, Dusty Groove, Inc.
(Stereo pressing with deep groove. Cover has light staining on the bottom corners.)