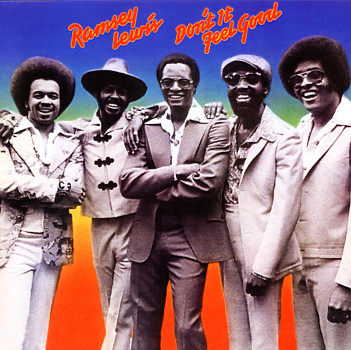 Massive keyboard work from the great Ramsey Lewis – easily one of his best records ever, thanks to some spaciously funky production by Charles Stepney! Stepney plays keyboards here along with Ramsey, and the twin-keys approach makes for a sound that's extra-special – one that sums up all the earlier soulful creativity of both artists in their late 60s Cadet Records years, and hones it down to an even sweeter groove for the 70s! A number of tracks have some sort of vocal component, but usually in a chorus mode that soon drops out when the keyboards hit home – and the record features a few great short "interlude" tracks that are almost as great as the longer numbers! Titles include the classic "Juaacklyn", a cover of Earth Wind & Fire's "That's The Way Of The World", and the tracks "I Dig You", "Fish Bite", "Don't It Feel Good", "Something About You", and "Can't Function".  © 1996-2022, Dusty Groove, Inc.
(Cover has unglued seams and a cutout hole.)

Hang On Ramsey
Cadet, 1965. Very Good+
LP...$3.99
Easily one of Ramsey Lewis' most successful records – featuring the hit soul jazz style that he forged with the Young/Holt rhythm combo, honed to perfection before a live crowd at The Lighthouse in Hermosa Beach. The record's a key part of Ramsey's live recorded output – showing the ... LP, Vinyl record album

Up Pops Ramsey Lewis
Cadet, 1967. Very Good
LP...$4.99
Although Ramsey first scored big with his spare trio recordings during the late 50s, by this point in his career, Cadet were wisely playing with his sound a lot, adding in new elements to keep things fresh and soulful. Such is the case with this album, which has Ramsey's second trio (with ... LP, Vinyl record album