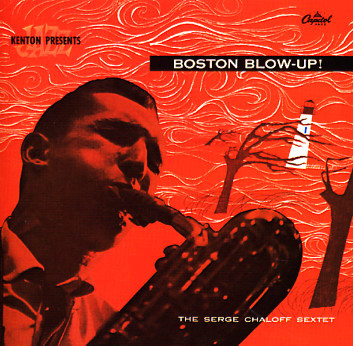 Also available
Serge Chaloff — Boston Blow-Up! ... CD 13.99
One of the few key recordings issued by baritone saxophonist Serge Chaloff before his untimely early death – a tremendous little record that really helped redefine the place of his instrument in jazz! The album is one of a number produced by Stan Kenton for Capitol at the time, but it's far from the cooler jazz outings of other "Kenton Presents" sessions – a real Boston Blow up that has Serge standing starkly out front on the baritone, hitting some tremendous notes that show a command and dexterity on his instrument that few other players could match! Also noteworthy is the presence of the great Boots Mussulli on alto sax – a sharp-edge player with a lot of Charlie Mariano touches, and an artist who's rarely heard in a setting so stripped-down as this. Other artists include Herb Pomeroy on trumpet, Ray Santisi on piano, and Jimmy Zitano on drums – and titles include the original numbers "Kip", "Unison", "Bob The Robin", and "Sergical" – plus versions of "What's New", "Yesterday's Gardenias", and Jaki Byard's "Diane's Melody".  © 1996-2022, Dusty Groove, Inc.
(Early 80s UK Affinity pressing. Cover has some edge wear, light aging, and a small tear and distro sticker in back.)

Plays Bird With Strings
Capitol, 1975. Near Mint-
LP...$3.99 5.99
The Supersax ensemble takes on the classic concept of Charlie Parker with strings – really sticking true to the groundbreaking spirit of the original experiments, while also bringing things forward a bit with their wonderful multi-horn approach! The group features lead alto from Med Flory, ... LP, Vinyl record album