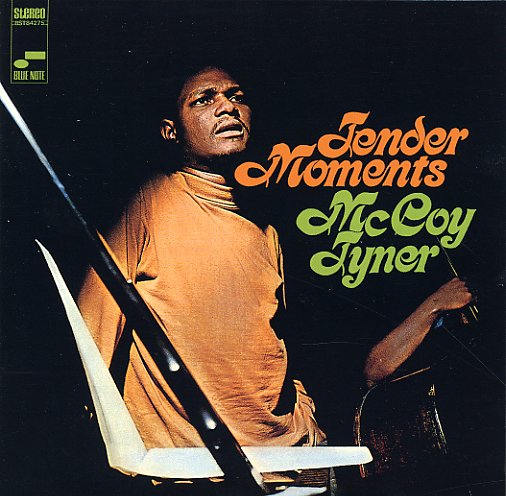 An incredibly strong set by McCoy Tyner – one of his best late 60s sides for Blue Note – and a record that really hints at the majesty he'd attain on record in the 70s! The album features Tyner's piano at the head of a large group that includes Lee Morgan on trumpet, Julian Priester on trombone, Bennie Maupin on tenor, and James Spaulding on alto and flute – very hip players who help McCoy forge the early steps in the spiritual ensemble mode that would become his greatest contribution to jazz in the immediate post-Coltrane years. Tyner's writing is out front here, and he's laid out some great charts for the group to groove upon – hitting a spiritual vibe that's very much in the mode of music to come on labels like Strata East or Black Jazz in the 70s! The set includes Tyner's classic "Man From Tanganyika", plus "Mode To John" and "The High Priest".  © 1996-2022, Dusty Groove, Inc.
(70s black b label pressing. Vinyl has a short click in one spot, but is great overall. Cover has a small bit of spliting on the spine, but is great too.)

Asante
Blue Note, 1970. Near Mint-
LP...$49.99 (CD...$16.99)
A wonderful record from McCoy Tyner – and a great reminder that some of his best post-Coltrane work was done for the Blue Note label – which was where Tyner seemed to hit the right sort of spiritual vibe to live up to his Impulse Records legacy! This album's got plenty of long, ... LP, Vinyl record album

Expansions
Blue Note, Late 60s. Near Mint-
LP...$39.99 (CD...$29.99)
A really mindblowing session from McCoy Tyner – perfectly titled "Expansions" to showcase the change in his style at the time! The record is one of Tyner's first larger group efforts – and is a brilliant example of the expansion of his talents in the post-Coltrane years ... LP, Vinyl record album

Dexter Gordon (aka Dexter Calling)
Blue Note/Up Front, 1961. Sealed
LP...$16.99
This isn't one of those "phoned in" sessions that seem to turn up way too much in contemporary jazz! The album's a real classic from Dexter's first big "comeback" period – and represents the strength of his Blue Note years at their best! Gordon's rich, full tone isn't ... LP, Vinyl record album