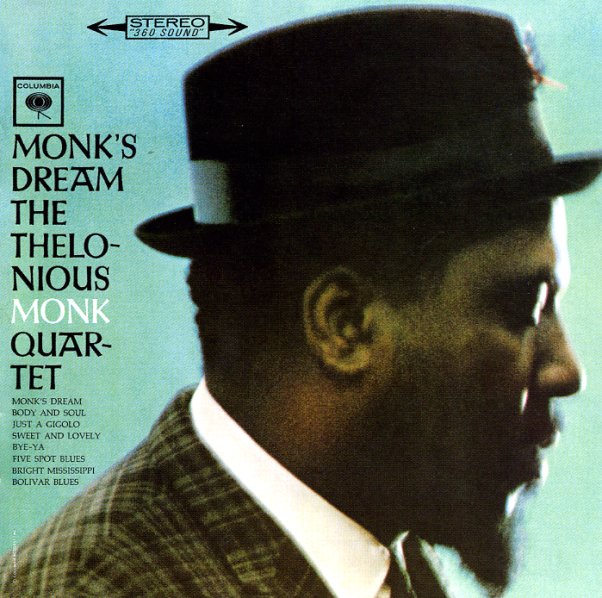 The first Thelonious Monk album for Columbia Records – and one of the best, as well – a beautiful illustration of the way that his shift in labels really set some new fire to his music in the early 60s! The group is Monk's sharp-edged quartet with the amazing Charlie Rouse on tenor, John Ore on bass, and Frankie Dunlop on drums – a group that's beautifully understated, but able to do incredible things in the company of the pianist – hanging back to let Thelonious take center stage one minute, then swinging hard together the next. The set includes great renditions of Monk classics that really illustrate his new energy at Columbia – and titles include "Bolivar Blues", "Bye-Ya", and "Monk's Dream" – plus great remakes of "Body & Soul" and "Just A Gigolo".  © 1996-2022, Dusty Groove, Inc.
(360 Sound stereo pressing with black text. Cover has ringwear, edge wear, small peeled spot at the top left corner, and some minor stains in back.)

Monkisms (aka Piano Solo)
Picc A Dilly, 1954. Near Mint-
LP...$14.99
Solo recordings with titles including "Round About Midnight", "Reflections", "Smoke Gets In Your Eyes", "Portrait Of An Ermite", "Manganese", "Off Minor" and more. LP, Vinyl record album

Always Know
Columbia, Mid 60s/1979. Very Good+ 2LP Gatefold
LP...$19.99 24.99
Nice 2LP set that brings together a large amount of material by Monk that was recorded during the 60s, but never issued at the time. Most of the material is live, and some of the tracks did come out previously in edited form – but this collection (like so many of the other great Columbia 70's ... LP, Vinyl record album

Big Band & Quartet In Concert
Columbia, 1963. Near Mint- 2LP
LP...$34.99
A unique little album from Thelonious Monk – an early 60s live date that features a really cooking big band, plus some solo and quartet tracks as well! The bulk of the album's played by the big band – an unusual mix of players that includes Phil Woods on alto, Steve Lacy on soprano sax ... LP, Vinyl record album

Thelonious Monk Orchestra At Town Hall
Riverside, 1959. Very Good
LP...$29.99 34.99
A unique large group effort from Thelonious Monk – but one that bristles with all the angular energy of his other great work for Riverside! The group here is a tentet – filled with excellent players who include Donald Byrd, Phil Woods, Pepper Adams, Eddie Bert, Robert Northern, and ... LP, Vinyl record album