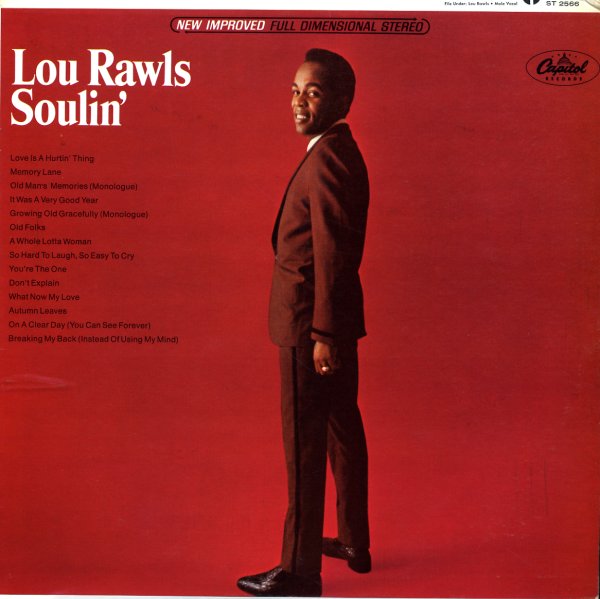 One of the best albums that Lou Rawls cut with the team of HB Barnum and David Axelrod – that incredible duo who made some of his 60s Capitol albums so great! The style here is wonderful – upbeat grooves from Barnum – who brings more soul into Lou's music than before – recorded by Axelrod with the right sort of sharpness and punch – that special quality he brought to Cannonball Adderley's 60s soul classics too! Rawls is really at home in the setting – stepping out in some points with these hip monologue passages that are as great as his singing – maybe even better, too – as they show a whole new side of Lou's personality – that badass, totally hip quality that people might never have expected from the early days. One of the best of these is the excellent "Old Man's Memories", about a guy sitting on a bench in Washington Park on the south side of Chicago, which then rolls into an amazing version of "It Was A Very Good Year". Other tunes have a great mix of soul and jazz – and titles include "Love Is A Hurtin Thing", "A Whole Lotta Woman", "Don't Explain", "Old Folks", and "Breaking My Back (Instead Of Using My Mind)".  © 1996-2022, Dusty Groove, Inc.
(Mono rainbow label pressing. Cover has a small split in the top seam and some aging at the opening.)

Unpredictable
Capitol, 1977. Sealed
LP...$7.99
An album that reunites Natalie Cole with the smooth soul team of Chuck Jackson and Marvin Yancey – the team who did such a great job with Natalie's Capitol debut, and who really continue the groove here too! The album's got a rock-solid approach through and through – a quality that has ... LP, Vinyl record album

Going For The Glow
Capitol, 1981. Very Good+
LP...$3.99
A tremendous sophomore set from Donna Washington – working perfectly here in the hands of Capitol soul maestro Chuck Jackson! Jackson's touch is wonderful here – just the right blend of cool and class, groove and grace that he brought to some of the label's best at the time – ... LP, Vinyl record album

For The Sake Of Love
Capitol, 1980. Sealed
LP...$6.99
Nice batch of modern soul tracks by this obscure vocalist from the late 70s. The album's a mix of uptempo and mellower titles, but Donna's voice is nice and soulful, and the record sports some good arrangements by Benjamin Wright and Tom Tom 84. Titles include I'll Let Nothing Separate Us", ... LP, Vinyl record album