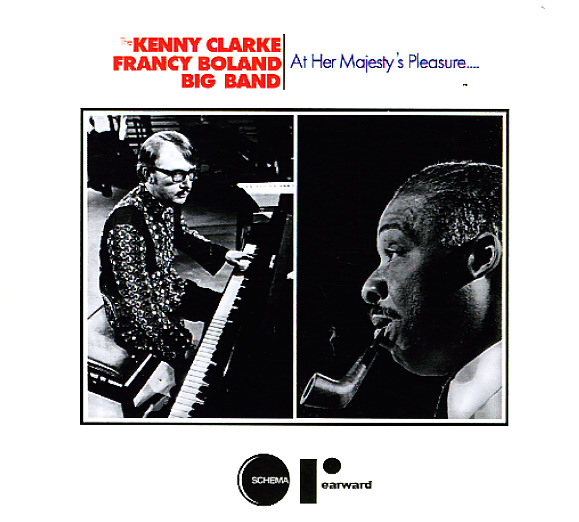 One of the greatest long-form albums from the Clarke Boland Big Band – a sophisticated suite that not only shows off the writing ability of Francy Boland, but also demonstrates the group's ability to swing like a mofo, even when things are serious! The album's a jazz suite written by Boland, and dedicated to the great prisons of England – where Johnny Griffin was once kept "At Her Majesty's Pleasure", due to non-payment of some income tax. The experience of Griffin led Boland to explore the idea of the British penal system with a number of powerful emotional themes, and the result of this writing is one of the CBBB's best albums of the late 60s – filled with rich colors and tones that go far beyond the earlier modes of the group, but without some of the too-complicated elements that sometimes show up in later suites. A good part of the album's success comes from the strength of the soloists – players who include Johnny Griffin and Ronnie Scott on tenor, Tony Coe on clarinet, Sahib Shihab on flute and soprano, Kenny Wheeler and Benny Bailey on trumpets, and Ake Persson and Nat Peck on trombones. Titles include "Pentonville", "Wormwood Scrubs", "Doing Time", "Broadmoor", and "Going Straight".  © 1996-2021, Dusty Groove, Inc.
(US pressing. Cover has light wear and a cut corner.)

Now Hear Our Meanin'
Columbia, 1965. Near Mint-
LP...$14.99
One of the best-selling albums ever recorded by the Clark-Boland Big Band – a set of hard-searing tracks played by an all star group, capturing the ensemble at its finest! The album's got a few nicely open-ended tracks that really let the soloists take flight – and players include ... LP, Vinyl record album

Southern Comfort
Blue Thumb, 1974. Very Good+ 2LP Gatefold
LP...$11.99
A landmark album from The Crusaders – and a set that really has them sweetening up their groove with lots of tasty R&B touches! The guitar's a bit more pronounced in the mix on this one – setting up some tightly funky rhythms that almost seem to free up the horns even more for solo ... LP, Vinyl record album

Rainbow Seeker
ABC, 1978. Very Good+
LP...$4.99
A sublime solo set from the great Joe Sample – a set recorded right at a time when his work with The Crusaders was breaking very big, and Joe was becoming one of the hottest fusion keyboardists of the 70s! This set gives Sample a nicely different focus than The Crusaders – more ... LP, Vinyl record album