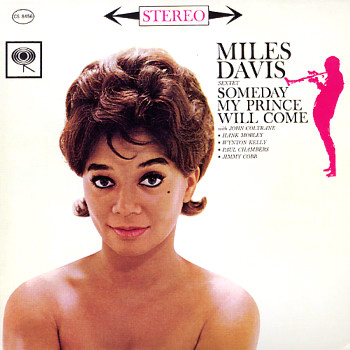 The tenor sax here makes the album a standout – as John Coltrane still works with Miles Davis on 2 tracks for the record, but Blue Note stalwart Hank Mobley joins in on the rest! The approach is similar to that of the classic Coltrane/Davis years – and in a way, the record's kind of a swan song to that period – one of the last studio session that Miles would cut in such an unabashedly sweet and lyrical way. And while Mobley's always better known for his harder-blown notes at Blue Note, he sounds totally great here next to Davis – really keeping up the gentle spirit and spaciousness of the record, and working with a gentleness that surpasses even his work on the legendary Soul Station album. Rhythm is by the trio of Wynton Kelly, Paul Chambers, and Jimmy Cobb – and titles include Miles' classic version of "Someday My Prince Will Come", plus "Old Folks", "Teo", "Drad-Dog", and "Pfrancing".  © 1996-2021, Dusty Groove, Inc.
(Sealed 70s pressing – PC 8456. Cover has a white sticker on the spine with the catalog number.)

We Want Miles
Columbia, 1982. Near Mint- 2LP Gatefold
LP...$19.99
It's not the Plugged Nickel or electric Japan in the 70s – but this is a surprisingly great 2LP set of live work by Miles from the early 80s – recorded in New York and Boston, with a lively full-on concert sort of feel! The group features Marcus Miller on bass, Bill Evans on soprano ... LP, Vinyl record album