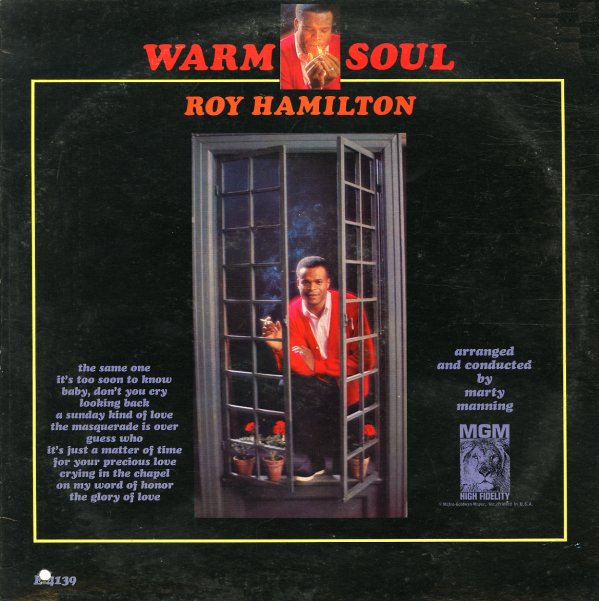 A key 60s classic from the great Roy Hamilton – an album done nearly a decade after his initial rise to fame, but with a really great sound overall! Roy's vocals are wonderfully full and feeling here – a bit in the mode of Brook Benton, with some mellower country influences at the bottom of the mix – but also somewhat mature and sophisticated, too – that rising respectability of the male soul singer of the 60s, finally given the space of expression that would match older jazz vocals. Arrangements on the album are by Marty Manning, with a feel that's full, but never overwhelming – and Roy's vocals are wonderfully upfront in the mix throughout. Titles include "Guess Who", "The Same One", "Looking Back", "Baby, Don't You Cry", "It's Too Soon To Know", and "For Your Precious Love".  © 1996-2022, Dusty Groove, Inc.
(Mono pressing. Cover has ring and edge wear, some peeling and round sale sticker remnants from removal, and some yellowing from age.)

Eric Burdon Declares War
MGM, 1970. Very Good+
LP...$29.99
War became so popular on their own in later years that it's easy to forget how they first sprung onto the soul charts – here, in an album of many styles that was put together by the wayward Eric Burdon after the dissolution of The Animals. We have to admit that Burdon was a genius to hook ... LP, Vinyl record album

Stand By Me
MGM, Late 60s. Very Good
LP...$4.99
A bit of a gimmick – but a good one! The title track to the album is a famous 6 minute version of "Stand By Me" – one that has Spyder singing the track in styles that imitate Eddie Kendricks, James Brown, Jackie Wilson, Billy Stewart, and others. The rest of the album ... LP, Vinyl record album

We Wrote Em & We Sing Em
MGM, Mid 60s. Near Mint-
LP...$13.99 16.99
Quite an unusual concept – one that really goes against record company policy of the time! Original writers of big rock and pop hits are given the chance to sing them here on their own – with Eddie Cooley singing "Fever", "Winfield Scott" sings "Tweedle ... LP, Vinyl record album

Everybody's Talkin'
Atco, 1972. Near Mint-
LP...$14.99
King Curtis' last album of studio work for Atlantic – pulled from a number of sessions recorded in the year before his untimely early death! The sound here is tightened up a bit from King's grooves of the 60s – done with a style that still draws on the Atlantic soul sound that Curtis ... LP, Vinyl record album