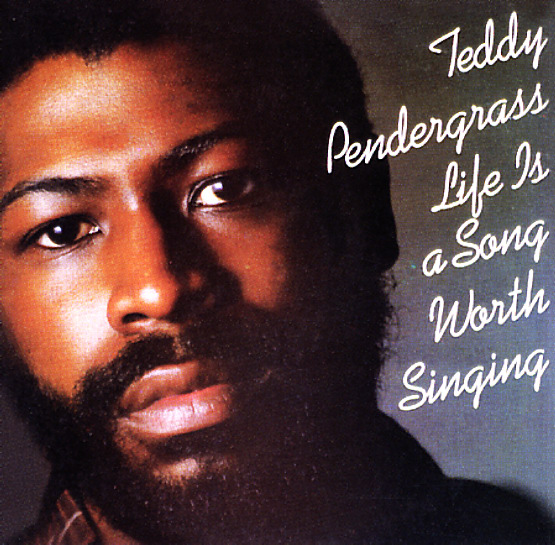 Life Is A Song Worth Singing

Sublime solo material from the great Teddy Pendergrass – the kind of record that instantly proves that his departure from Harold Melvin & The Blue Notes was a great idea, as the man alone is even more of a power to be reckoned with! The set's a cornerstone in that great second wave of Philly soul from Gamble & Huff – that point when the rest of the world was picking up on the disco grooves they forged earlier in the 70s, and they went for a more adult, more sophisticated style with singers like Teddy, Jean Carn, Phyllis Hyman, and others. The whole thing's perfect – and nicely balances between mellow moments and groovers – with gems that include the always-great "Close The Door", the massive "When Somebody Loves You Back", and other cuts that include "Get Up Get Down Get Funky Get Loose", "Life Is A Song Worth Singing", "Cold Cold World", and "It Don't Hurt Now".  © 1996-2021, Dusty Groove, Inc.

Teddy
Philadelphia International, 1979. Very Good-
LP...$11.99
Proof that Teddy Pendergrass was a fantastic solo act – and some of the most godlike work that he ever recorded! The record shows Teddy moving into territory all his own – with wonderfully smooth quiet storm arrangements offsetting the deeply soulful vocals he forged with Harold Melvin ... LP, Vinyl record album

Only The Strong Survive
Philadelphia International, 1977. Near Mint-
LP...$7.99
Although Jerry Butler had the first hit with "Only The Strong Survive" – way back in the late 60s, when Gamble & Huff were using his career to first forge their new ideas of Philly soul, Billy Paul does a great job with the cut here, taking it into a smooth modern mode that ... LP, Vinyl record album

Unmistakably Lou
Philadelphia International, 1977. Near Mint-
LP...$6.99
One of the greatest records ever by Lou Rawls – if only for one cut! That's the amazing "See You When I Get There", which starts with a Fender Rhodes riff over a hard thumping beat – while Lou does this little monologue about calling his woman at home. Then strings sweep in, ... LP, Vinyl record album

So Full Of Love
Philadelphia International, 1978. Very Good+
LP...$9.99
A masterpiece of modern soul that shows The O'Jays working in a style that would become their dominant mode for the next decade – not as upbeat and club-oriented as in the mid 70s years, with a sweet, sophisticated modern soul approach that really let the group grow stylistically. Mellow ... LP, Vinyl record album