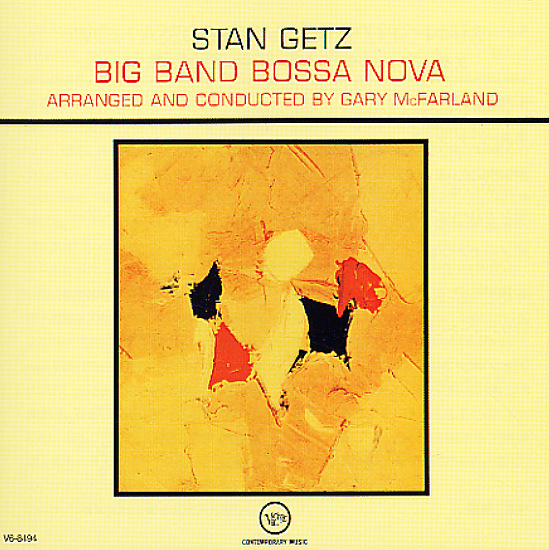 An overlooked gem from the Verve bossa years – a session that features the sweet tenor sax work of Stan Getz, alongside some swinging bossa arrangements from the great Gary McFarland! Given the strength of Gary's own work for Verve at the time, it's no surprise that he's a perfect accompanist for Getz on the session – working with just the right amount of space to let Stan stand out from the pack, and really creating a great blend of Brazilian rhythms and some of the modder 60s styles at Verve. Gary contributed a number of originals to the session too – and titles include "Bim Bom", "Manlancolico", "Balanco No Samba", "Noite Triste", "Chega De Saudade", and "Manha De Carnival".  © 1996-2022, Dusty Groove, Inc.
(Mono MGM pressing. Cover has light aging and an embossed X on the back.)

Focus (70s issue)
Verve, 1961. Near Mint- Gatefold
LP...$11.99
Oft-overlooked album that's actually one of Getz's most far-reaching of the 60s! Recorded in the year before he got caught up in his bossa pop frenzy, the record shows Getz as a darkly toned modernist, weaving out complex solos over the album's extended suite "Focus", written and ... LP, Vinyl record album

Master
Columbia, 1975. Near Mint-
LP...$13.99
A gem of a session from Stan Getz – recorded in 1975, but unissued until the mid 80s! The set was probably lost amidst the flurry of more dramatic jazz recorded by CBS at the time – as it's a relatively understated session that has Stan blowing with acoustic accompaniment from Albert ... LP, Vinyl record album

Blues Summit (Side By Side/Back To Back)
Verve, 1959. Very Good+ 2LP Gatefold
LP...$16.99
A great little album that builds on the strength of Johnny Hodges' small group 50s sessions for Verve – and which lets Duke Ellington in on some of the action! The format is nicely stripped-down throughout – featuring Hodges in sextet and septet formation with players that include Ben ... LP, Vinyl record album

Getz Meets Mulligan In Hi Fi
Verve, 1958. Near Mint-
LP...$34.99 (CD...$13.99)
The tenor of Stan Getz meets the baritone sax of Gerry Mulligan – and then they switch things around for half of the record, as Stan picks up the baritone and Mulligan takes on tenor! Gerry always seems to open up whole new sides of his playing when sharing the leader spotlight with another ... LP, Vinyl record album

Oscar Peterson Plays The Cole Porter Song Book
Verve, 1959. Very Good+
LP...$11.99
Cole Porter's tunes are great enough on their own, but Oscar really opens them up on this set – picking up the inherent rhythms in the numbers and really working them over – in a way that makes the outing one of the most lively in Peterson's songbook series for Verve! Oscar's fluid ... LP, Vinyl record album