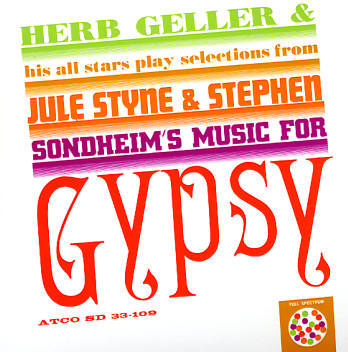 A familiar concept, but an incredibly hip album – versions of tunes from the musical Gypsy, all played by an incredible group led by altoist Herb Geller! Geller could be a fantastically modern player when he wanted to be – and this album pushes him distinctly in that direction, as it has him working with a strong group of young players that includes Scott LaFaro on bass, Elvin Jones on drums, Hank Jones on piano, and Thad Jones on trumpet – kind of a "Jones Brothers Plus" album! The basic premise is that Geller and his group play tunes from the hit musical Gypsy – but they take those tunes and turn them on their head, creating tight little modern jazz gems, sparkling with creativity, and polished by some exceptional work by Geller and LaFaro! Barbara Long sings vocals on a few numbers, but the rest of the album's instrumental – and titles include "Cow Song", "Together", "Little Lamb", "Small World", and "Some People".  © 1996-2021, Dusty Groove, Inc.
(Yellow label harp logo pressing with deep groove.)