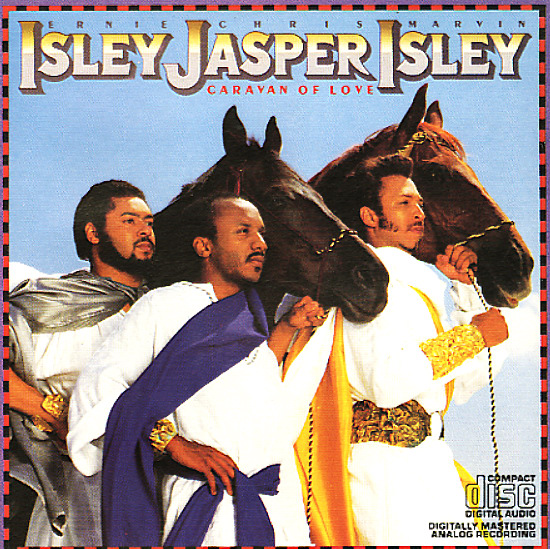 A huge 80s moment for the Isley Brothers empire – a set that has Ernie and Marvin Isley stepping away from the main group with Chris Jasper – to reinvent their sound for the 80s! The record still has all the slinky soul and upbeat funk of the Isley material from the late 70s – but also pushes the groove in a slightly different way – often using leaner arrangements that are focused on beats, basslines, and keyboards – which only seem to make the warm vocals of the trio sound even more seductive in the end! There's that subtle sense of majesty that the group always had in their music at their height – an influence that might well come from the presence of Jasper – and the album's noteworthy for the wonderful "Caravan Of Love", a soulful spiritual tune that's kind of to 80s soul what The Impressions "People Get Ready" was to 60s soul! The album's got a good mellow harmony sound, and other titles include "Liberation", "I Can Hardly Wait", "Insatiable Woman", and "If You Believe In Love".  © 1996-2022, Dusty Groove, Inc.
(Includes the printed inner sleeve. Cover has a lightly bent corner.)

Live – Doing The Push & Pull at PJ's
Stax, Early 70s. Very Good+
LP...$6.99
A killer live set by Rufus Thomas – recorded right at the height of his funky comeback, before a very right-on crowd at PJ's Nightclub in LA! Rufus was always a great entertainer, and he really opens up in this live setting – doing some nice versions of "Do The Funky Chicken" ... LP, Vinyl record album