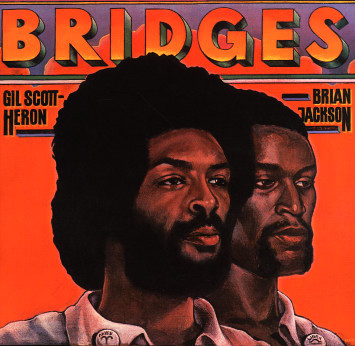 An oft-overlooked jazzy gem from Gil Scott-Heron and Brian Jackson – and a beautifully swinging session that has Gil toning it down a bit, and working into a nicely musical groove that gets past the heavy politics of earlier years! The record's a great showcase for the more upbeat side of Gil's talents – and what it lacks in righteousness, it more than makes up for in a warmly flowing and very soulful vibe! The band's in great form – laying down tight warm jazzy riffs that provide some of the best backing for Gil's voice we've heard since Winter In America – and titles include the wonderfully catchy "Racetrack In France", plus "Hello Sunday Hello Road", "Under The Hammer", and "We Almost Lost Detroit".  © 1996-2021, Dusty Groove, Inc.
(Includes the printed inner sleeve. Cover has light wear.)

Moving Target
Arista, 1982. Near Mint-
LP...$39.99
An overlooked gem from Gil Scott-Heron's classic years on Arista Records – recorded at a time when the singer and group were strongly working in a jazzy vein – even though Brian Jackson isn't part of the lineup! Gil learned plenty of lessons from his time with Jackson – ... LP, Vinyl record album

Cream City
Arista, 1977. Near Mint-
LP...$16.99
Sweet modern soul with a sound that would get picked up on years later by the LA G-Funk scene. The album's produced by War's Far Out production team – and it's got a smooth sound that's mixed with moogy keyboards and compressed instrumentation on the best cuts. Some tracks are a bit too ... LP, Vinyl record album

Condition Of The Heart
Arista, 1985. Sealed
LP...$9.99
An 80s soul classic from Kashif – an artist who really helped transform R&B at the time, all without the benefit of a last name! The album's completely arranged and produced by Kashif himself – cementing the reputation he'd begun working behind other artists in the earlier part of ... LP, Vinyl record album

Watch Out!
Arista, 1987. Near Mint-
LP...$14.99
Patrice Rushen in a crisp 80s soul mode! Watch Out finds Patrice really cutting down the keyboards in favor of stronger vocals right out front – breaking all the rules, as the title of second song tells it – and it works really well! Most of the arrangements, synth and drum ... LP, Vinyl record album

Saint & Stephanie
Arista, 1979. Very Good+
LP...$6.99
Smooth and disco oriented – with production and arrangements by Michael Zager, in that fast crossover style he used often at the time. Titles include "I Just Want To Be The On In Your Life", "Last Train To The Boogie", "My Heart Is Yours", "Standing On The ... LP, Vinyl record album

Woman Out Of Control
Arista, 1983. Very Good+
LP...$4.99
Plenty of control here – as Ray Parker's at the height of his 80s hitmaking power, scoring strongly on one of his key classics from the decade for Arista! The tunes have a bit more of that catchy, rhythm-heavy sound that Parker was forging at the start of the decade – a quality that ... LP, Vinyl record album